I suppose the best, easiest and most straightforward way to describe this one is to start at the start.

As I said, this was the 13th half marathon of my planned 18 this year. On this occasion it was a virtual one to coincide with the 401 Foundation Festival of Running in Portishead.

I couldn’t make it in person for the weekend but decided to avail of their virtual option instead. That way, because it was linked to an actual event, I was comfortable counting it as one of my 18 … just as I had done with the Reading Half back in March.

However, I decided to incorporate the Storming The Castle 10k into my total distance for the day. This race is one of the most popular of its kind in Northern Ireland and is always a good day out finishing, as it does, in the shadow of the 12th century Carrickfergus Castle. It’s actually the second time in a few weeks I’ve started and finished here, #11 was along the same course earlier this month so it was an route I was familiar with.

With the actual race only being 6.2 miles it meant, of course, that I had to find another 6.9 miles from somewhere and, by some absolute miracle of persuasion, I had coerced Bronagh and Iverene into doing this with me.

To take the edge off slightly we decided to do a warm-up mile first. That meant that after the 10k we would have done over half our miles for the day which we hoped would be important psychologically.

Half-an-hour before the race was due to start we set off on our warm-up, not really sure where to go but it seemed we were far from the only people doing this so just followed everyone else.

It was a good exercise and when we returned to the 10k start we were nicely limbered up. Soaked to the skin, admittedly, but ready to go with a mile already chalked off our overall target for the day.

After a short break the race itself got underway. I tucked myself in behind the 70 minute pacers. I can run faster than this but because I knew I had almost the same again to do afterwards I reckoned that pace would be fine for now.

And so it proved. It was comfortable, and fun. I was enjoying myself.

Then, at 5k, I was suddenly struck by a stitch. This hardly ever happens to me and, unfortunately, it slowed me a bit as I tried to deal with it.

I can only put the stitch down to eating a protein bar just before the race started. I don’t normally eat that close to a run but it was included in our race pack and rather than not use it I didn’t think it’d do much harm to have it there and then. I’m not usually prone to stitches but I also don’t usually eat straight before a race so logic suggests the two are linked.

Anyway, I lost touch – but not sight of – the pacers. Once I was back running I easily maintained my pre-stitch pace but I had no real appetite to make up for lost ground. If I was ‘only’ doing 10k then it would have been different but I was looking at the bigger picture.

In the end I finished just over nine minutes faster than last year which, over a 10k, was a pretty hefty chunk of time. I was disappointed it wasn’t more because it easily could have been but I suppose I can’t grumble too much.

That was the easy bit of the day out of the way. It was my second time doing this race, it’s one of my favourites but it was a shame I couldn’t avail of the post-race hospitality this year, always a highlight.

Now came the difficult bit, the remaining 5.9 miles to reach half marathon distance.

However, we are all taking part in a much bigger race at the end of October so today was all about keeping up our training. Plus, from my own point of view, if I didn’t carry on then I’d have to find another half marathon from somewhere in order to meet my #18in18 target.

My goodness, it was tough. Mentally I had already run a race. I had ‘finished’ for the day yet here I was going again. Physically, too, there were already over seven miles in my legs and now I was forcing them into keeping going for what was effectively a third run of the day. There was the lull between the warm-up and the race, and then a further period of inactivity between the race ending and this which didn’t help either.

The race took us past the castle in the direction of Belfast so, for this extra run, we decided to go the opposite way, away from the castle and up to the power station on the edge of town.

None of us had much of a clue where we were going, it was just a case of keeping the sea to our right until we ran out of town whilst hoping we had done enough miles so that when we turned back we would finish at the castle, beside which we were parked.

This was a real war of attrition. It was gentle but it was tough. It definitely didn’t feel like a good idea anymore.

And it rained. It rained a lot. My already sodden club t-shirt was, quite literally, sticking to me. Then the rain stopped, I began to dry out a little and my t-shirt start to rub. Believe me, runners nipple is very much a ‘thing’. This was a first for me … ouch, ouch and ouch again!

Anyway, by the time we got back to the castle we, annoyingly, still had a mile to do. I just wanted this over and done with so it was a case of just running around the small harbour, then around the car park in ever decreasing circles until, blissfully, the magical 13.1 miles appeared on my Garmin.

Thanks to Bronagh and Iverene for sticking with me. Huge apologies, too, for putting you through this but I honestly don’t think I could have carried on without you.

But it was done. Three runs in one day. 13.1 miles under my belt, another half marathon chalked off, just five to go … and the challenge continues next week in Londonderry! The end is in sight and, being perfectly honest, it really can’t come quick enough. 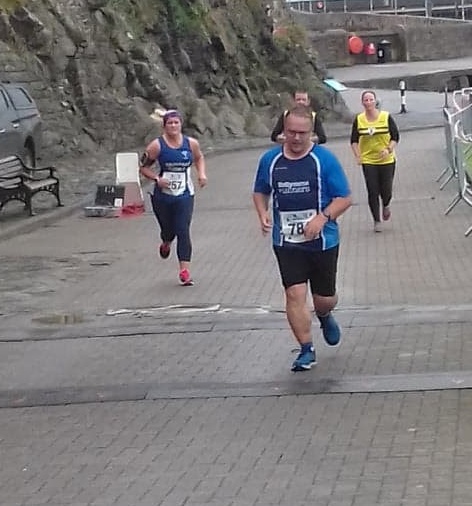 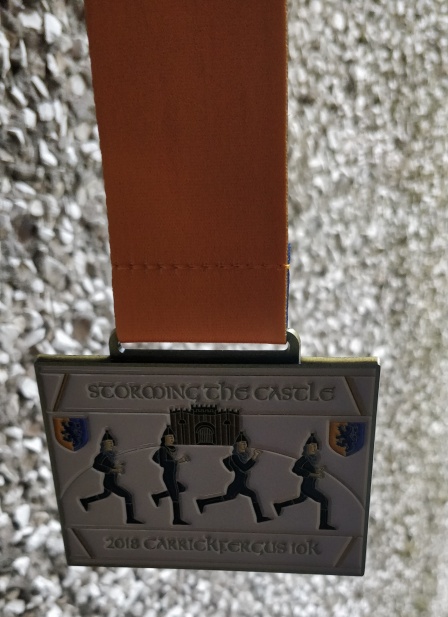 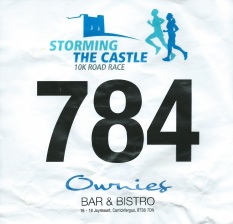