Where else will I ever be at 6:30pm on a Monday night than at the weekly club training session? Except tonight I nearly wasn’t. I’ve only been a member of the club since late last year but tonight I felt as nervous as I did on that first night.

My running hasn’t pleased me lately – and I’ll admit that’s the crucial phrase here, it ‘hasn’t pleased me’ – so, walking up to the Leisure Centre, I debated with myself whether or not to go.

If I didn’t go it’d save me from another bad run. But that would be chickening out, and would make it easier not to go on another occasion – and that could be the start of a slippery slope, a path I don’t really want to go down.

Then again, not going would save me from further self inflicted destruction and humiliation.

But I went. This was ‘step up’ week, the monthly night when you’re encouraged to move up to the next level. So what did I do? I stepped down, back down to the 30-minute group. I hated myself for doing it, but I had no confidence I could cope with the 45s and definitely not with the 60s, even though I knew both were well within my capabilities.

So, instead of self destruction, I opted for self preservation and went with the 30s in an attempt to give my confidence a little booster. I feel I’ve forgotten how to run for long periods without giving into the urge to walk, so I was hoping that a return to the 30s would help remind me that I can do it.

And that’s more or less what happened. It was slow and steady throughout, just what I needed really. I resisted the urge to go faster, and chose to focus on the person immediately in front of me but without going past them as much as I was tempted at times, just using them to pace me around.

It actually felt ok. Yes, it was a little bit slower than I’ve been doing lately but I wasn’t terribly worried about that tonight, I just wanted to get round and get the half-an-hour in my legs. At least I didn’t moan and whinge like a precocious little brat tonight, that’s a bonus!

I decided not to run home tonight, figuring that the 30 minutes was enough for now. I’ve still got the rest of the week to get a couple of longer runs in before Sunday, hopefully I’ll remember to approach them in the same way as tonight and to just take it easy, get the miles in my legs by all means but save myself for the weekend. 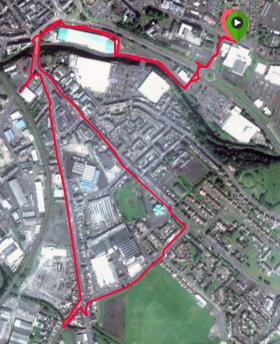