I’m almost there! The end is in sight in my self set challenge to run 18 half marathons in 2018, so no better time than to throw out a quick recap of my progress so far.

It all started back in March in London …

1. The Big Half
I couldn’t really have got off to a better start than this, kicking off within sight of Tower Bridge and finishing right beside the Cutty Sark. Iconic.

Big city, big race, big crowds – perfect for me. During the race I set a personal best over every single distance ie: 5k, 5 miles, 10k, 10 miles and Half … I loved this so much I signed up again for 2019 as soon as entries were opened.

2. Larne Half Marathon
The first of the local races in my challenge, and another rip-roaring success. A race that treated us to stunning views along the world famous Antrim Coast on a gloriously sunny day.

Although a little bit slower than the Big Half I was still really pleased with my performance, only being denied a PB by a great big hill halfway through.

3. Reading Half Marathon (Virtual)
A little bit different this time, a virtual run based on the Reading Half Marathon. The actual race was cancelled because of the weather back in March so the organiser, in conjunction with the Virtual Runner website, allowed runners to earn the same medal in their own time and a route of their choosing.

I decided to do it around my hometown of Ballymena. I also used this ‘race’ to experiment with Jeffing (the run/walk method) and hated every minute of it. My legs hurt, it rained, I got soaked. Next please.

4. Not The London Marathon
Held on London Marathon day, this event was organised by the East Antrim Marathon Series over a 10k course with a number of different distances available. I did two laps to bring me up to Half Marathon distance.

I didn’t really enjoy this one either. The route was tough in places, there was a small number of entries, my head wasn’t in it etc. etc. … from the highs of London and Larne these last two runs brought me crashing back down to earth.

5. Lee Valley VeloPark Half Marathon
Back to London at the end of May for a RunThrough event outside the 2012 Olympics Velodrome. The route was 13 laps of a circuit designed for cyclists, which made it very undulating and whilst it wasn’t particularly steep it did get quite trying towards the end.

I almost pulled out at around eight miles. I felt quite ill due to the heat of the day, but after a quick refresh I battled through to finish. If I didn’t already know it, this challenge was going to be tough in places!

6. Lacock Half Marathon
The first of three races in two weeks. This one was in the picturesque Wiltshire village of Lacock, three laps of a 4.4 mile course. A lovely route which took us out into the countryside before returning into the village to great support from locals and tourists alike.

Another really hot day, and the third loop was a real struggle but, on reflection, a great event and a great day out. Things were beginning to look up again!

7. Lisburn Half Marathon
I ran the Lisburn 10k last year and was awful in it, so I wasn’t really looking forward to this one especially since it was double the distance.

Imagine my surprise, then, when I only went and set a PB! The fact that it was a cooler evening undoubtedly helped, but I also got my race tactics spot on. My head was in the right place, I didn’t panic after starting almost at the back and simply and methodically picked off those in front of me one by one.

8. Swansea Half Marathon
It’s not hard to see why this has been voted the UK’s favourite half marathon. An outstanding event featuring a wonderfully scenic Swansea Bay hugging route with a big turnout of both runners and supportive locals.

If it wasn’t for the fact that it was another ridiculously hot day I have no doubt I’d have set another PB. This is one I’ll return to do another day.

9. Bath Two Tunnels
Perhaps the most unique race to date, around five miles or so were run through disused railway tunnels outside Bath. Dark and atmospheric, I really enjoyed them.

The heat has been a bit of a recurring theme lately, but nothing has been as hot as this one. The tunnels themselves were lovely and cooling, but outside the temperature peaked at 29° which simply did not agree with me. It was like running in a sauna, and I did consider dropping out at one point again.

10. Dark Hedges Half Marathon
Into double figures! The most local race to me. If you’re a Game Of Thrones fan you’ll recognise the area this one is named after but, if you’re not, it’s just another rural race over an undulating course.

I ran this with Bronagh, one of my training partners, it was her first half and I got a real kick out of helping her round. Despite the hills I felt fresh at the end.

11. EAMS Carrickfergus Castle to Loughshore Half
A low key race organised by the East Antrim Marathon Series (EAMS) people, and the first of two in four days. I had a horrendous experience the last time I participated in one of their events (see #4 on my list) but this was altogether different.

Basically an out and back from Carrickfergus Castle to the outskirts of Belfast all along the coast, I ran this more or less on my own and found that a real help because I was able to focus on my own pace rather than panic at everyone around me leaving me behind during the early stages.

12. Rock ‘n’ Roll Half Dublin
I’d been looking forward to this for quite some time but what started out as a dream ended up as nightmare.

Very definitely a race of two halves, I ran a calculated, composed race for the first 10k then it was like someone pulled the plug on me. I hadn’t been feeling well, but thought I’d beaten the bugs … then they returned with a vengeance. I really struggled over the second half and was grateful to just finish!

13. 401 Festival of Running Virtual Half
The second virtual half in my challenge. Sort of. I started the day running a local 10k (Storming The Castle) but then carried on to bring it up to 13.1 miles as part of Ben Smith’s 401 Foundation Festival of Running that was taking place the same weekend in Portishead near Bristol.

Mentally and physically this was tough. After having already run a race it took a lot of willpower to keep going … and the little lull between finishing the race, getting medals, leaving stuff back in the car etc. and then carrying on for another 6 miles or so meant my legs had cooled down only for them to have start running again.

So that leaves just five left. A mixture of the good, bad and downright ugly but I never expected it to be easy.

I’m not going to lie. I am getting tired of this. It has taken a lot out of me, perhaps as much in my head as my body.

I am working hard, I’m running at least four days a week and it is starting to get frustrating that my speed hasn’t increased to any great degree. Yes, I’ve set two half marathon personal bests over the course of the challenge but, I don’t know, maybe I was expecting myself to be ‘better’ by now.

But, I’m almost there, I’ll miss it when I’m over and I’m already starting to think what I can do next year!

The final five have been confirmed as follows:-

A pretty hectic September, but I’m feeling so much stronger and fitter now than I did when I started despite the frustration over my speed.

Part of the reason I’m doing this is to raise a little something for Diabetes UK. I’m Type 2, and have received great encouragement and advice from #TeamDUK over the years.

If you’ve enjoyed my journey so far and would like to support me in running towards a world where diabetes can do no harm then I would be so appreciative if you could make a small donation via my JustGiving page. 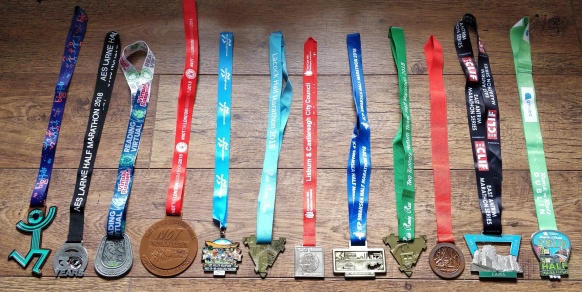