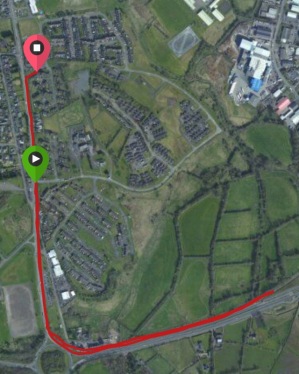 “Never leave a run feeling anything negative about it. With running, you can win every day.”

So says five-time Paralympic gold medallist Noel Thatcher MBE as quoted by Vassos Alexander in his book ‘Don’t Stop Me Now. 26.2 Tales of a Runner’s Obsession’ ….. and that summed up my run today.

I was scheduled to do 24 minutes non-stop as part of the ongoing Ballymena Runners C25K programme. Apologies for repeating myself but, once again, I was full of doubt and worry going out.

To the casual reader that might sound utterly ridiculous. I’ve done a marathon, half-marathons, 10-milers and other long distances so why the hell would I be worried about a 24 minute run?

It’s simple really. A lack of belief in myself and the fear of injury has restricted me to run/walk for the majority of my running career. I was running non-stop this time last year but then it all went to hell in a handcart.

Slowly but surely – thanks to the C25K I’ve been following – I have got my confidence back but there’s still that innate fear of failure before every single run that should I break into a walk my skewed mind will interpret that as a failure of such epic proportions that it’ll send me hurtling back to square one.

But, two runs from the end of the programme, it hasn’t happened yet.

So, back to Messrs. Thatcher and Alexander. Because I was so unsure of myself before today’s run I decided to try something different and listen to some more of the aforementioned audio book.

That passage quoted at the start of this missive came a couple of minutes into my run and, on reflection, inspired me throughout the remainder of the session.

I have found the book a welcome distraction. It’s only the second time I’ve listened to it whilst out running and both times I’ve produced the goods.

I was determined not to let myself down and complete the full run without stopping – and so I did. And what was really pleasing about it was that I covered more ground and went at a faster pace than I did with the group on Tuesday night.

Fair enough, it wasn’t massively better but it’s all about marginal gains, right?