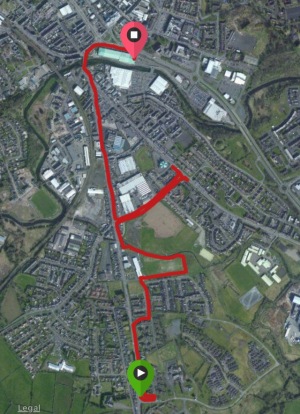 I’m sure in any ‘You Know You’re A Runner If ….’ list worth it’s salt there’ll be reference made to having an irrational and illogical attachment to a pair of trainers.

After all, these are the babies that you train in every single time you go out. You’ll have a collection of tights, shorts and shirts that you’ll interchange depending on mood, whim and pong factor.

But, shoes, they’re the one piece of kit that will consistently accompany you through the highs and the lows of each run.

It’s like they become part of you. Get it wrong, buy a pair that’s not suited to your feet and you’ll pay for it. Get it right, and they’ll propel you to bigger and better things.

So it’s no easy decision to change them, right?

You know that day is coming. You’ve watched them deteriorate gradually. You may have dared not believe that you’ll have to part company with them but, as sure as night follows day, you eventually have to bite the bullet, bid farewell to the old faithfuls and begin as hopefully a productive a relationship with a new pair.

And, for me, that day was today.

I’ve noticed the heels in my old Asics Gel-Evate slowly disintegrate run on run. The foam and stuffing had all but disappeared and I was in danger of wearing them right down to the outer casing.

Now, I’ve had a very strong love/hate relationship with these trainers. I didn’t really like them. The colours are garish to say the least, enough to scare small animals and children. I found them heavy and clumpy to run in. I blamed them – in the finest tradition of shoddy workmen since time immemorial – for my bad runs.

But, here’s the thing, I’ve still completed every major run in them. I’ve tried, and preferred, other models but, when it came down to it, I kept going back to the Asics.

They saw me over the finish line in Hastings, London and Portsmouth as well as the many, many training runs in all conditions. Hell, my London timing chip is still attached to them!

I made the decision today to wear them for one last run and, perhaps fittingly, I ran to the nearest sports shop in them to let them have a look at their predecessors, to stare them in the eyelets and to give them the chance to school the new pair in what it takes to have me run in them, for better or worse! 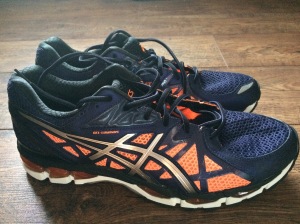 Say goodbye to Asics Gel-Evate, say hello to Asics Gel-Luminus! I tried to get as close a match as I could, everything seemed to be in the same place and they did feel significantly lighter. They are also, despite the name, considerably less colourful!

I *might* just wear the old pair on Tuesday night when I complete the C25K programme I’ve been following. Being something of a sentimental old goat, it seems to me to be a tad unfair to retire them just short of that but that’s something I’ll think about between now and then.

Anyway, I did go out on a run today. It was Week 8, Day 3 and therefore meant 27 minutes non-stop.

The run itself was ok. I suspect I went off a little too fast because I began to blow a little during the middle section but I kept going and, in the end, recorded a slightly faster overall pace. Indeed, I’ve gone progressively further and faster in each of my last three outings which has been pleasing. My legs did hurt and did feel tired, but that’s what running does and it’s the same for everyone.

As I said, I went further and I went faster so that must mean I’m continuing to get stronger. It’s all good.

I would like to say I ran the whole thing without stopping but I can’t. However, it wasn’t my fault. As I was running along this car pulled over beside me and, thinking I recognised them, I slowed down just to say hello … but it turned out to be someone looking for directions. Seriously? Directions? Can’t you see I was bloody well running? What sort of inconsiderate bugger does that? There were people walking behind me, why not ask them?

And, as if that didn’t exasperate me enough, when I reached the sports shop the assistant asked me what I would be using the trainers for in order ascertain the best pair for me etc.

A fair enough question, and she seemed to know her stuff when it came to the difference between support and cushion etc. ….. but then she asked how long the marathon I’d done was.

I’d heard rumours that these sorts of questions are asked but I thought it was the stuff of fairytale, fantasy and exaggeration. But, no, here I was presented with the very same query.

I wasn’t quite sure whether or not she genuinely didn’t know or was just taking the piss so I answered v-e-r-y s-l-o-w-l-y ….. twenty-six-point-two-miles (making sure to include that all-important .2!).

Her reply left me speechless: “Oh, I’ve done a marathon too, but it wasn’t as long as that, it was just 10k.”

I’ll just leave that there for you to read and weep.