Every year my club holds the Ballymena Belles 5-mile Race, a ladies only event from Galgorm almost into Ahoghill and back again.

I might run like a girl and all that but my bits and bobs prevent me from entering the race so the next best thing is to run the route and see what all the fuss is about.

The race is this Tuesday night so Iverene and Bronagh went on a practice run this morning and graciously invited me along to join them.

Initially I was quite keen but I’ll admit to not feeling up to it this morning after a broken night of sleep, caused by my ongoing restless legs problem, and would have eagerly grasped at any opportunity to back out and return to bed.

But nothing presented itself and I knew, deep down, that it’d do me the world of good to get out.

Walking to the start I questioned my sanity. It was cold, I was tired … surely this wasn’t going to end well.

However, once we started it wasn’t too bad. The first mile is always a bit of a struggle because you’re trying to settle into your run and fighting a mental battle with your legs but once I got past this I began to feel better.

The first couple of miles (-ish) were fairly flat until we turned right onto the Killane Road just on the outskirts of Ahoghill and I saw a long steady climb stretching out in front of me.

My first thoughts were that it looked a little daunting but the more I ran the stronger I felt and, indeed, I began to quite enjoy myself and the challenge of the climb … although at one point I nearly met with a nasty accident involving a little squirrel that launched itself from a tree straight at me, landing just to my right before scampering away, hopefully as frightened of me as I was of it!!!

Getting to the top of the hill we turned right back towards Galgorm and whilst a lot of this was downhill there were still occasional little kicks dotted along the route, but I welcomed these, viewing them as tests that I was determined to beat and that I’m pleased to report I did.

I continued to feel stronger, much to my surprise, and was disappointed that the run had to end. I could have gone on for longer if required which bodes well considering I have another 16 half-marathons to do this year, not to mention the full Dublin marathon!

Despite my worries it turned out to be a hugely enjoyable morning … not only for the excellent company but as an affirmation that my running is still on point at the minute. 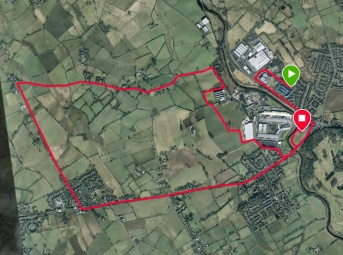