Tonight was something of a departure me, my first outing at the club interval training on a Wednesday evening.

I’d often thought of going but a lack of confidence and a surety in my mind that I’d stand out like a sore thumb amongst the (much) speedier runners always put me off.

But, recently, a few from my Monday night sessions have expressed an interest in going so tonight, tenatively, seemed to be the night that we’d all go to see what it was all about and, importantly, to give each other moral support.

I walked up, the usual 40-45 minute dander, but when I got to Ecos I didn’t know where everyone started from so it took a few minutes to find them and when I did I hardly had time to catch my breath before we were off, running to the carpark to do the warm-up.

Yep, running to warm-up before we started the actual running! Note to self, leave home much earlier next time!

It was such a relief to see a fair few from the 30/45 minute groups on Monday, I immediately relaxed knowing that I’d be within similarly paced company.

So, after the warm-up runs and exercises it was time to start the sessions properly. Tonight’s was 9 x 2 minutes running followed by 90 seconds recovery which, for me, was walking around in circles just to keep active.

The idea was that faster runners would go much further on the way out but would catch us slower ones on the return to the starting point so that we all then left from the same place again … and it worked!

For me it was a case of not sprinting flat out – we had to do this nine times! – but to keep going at a steadier pace than normal for the full two minutes, no walking allowed. I know running for two minutes isn’t anything out of the ordinary but I usually pace myself – tonight was going much harder than I’m used. I’m pleased to say I managed this, my Garmin constantly buzzing to tell me I was going faster than normal. I’ll take that.

It was tough, I’ll not deny that, but it was also exhilarating and lots of fun … everyone seemed agreed on this, and plans were made to do it all again next week. I can’t wait! 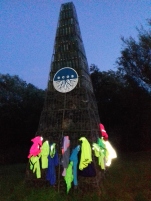