Remember how I said in the my last post that I wasn’t targeting the Spar Craic 10k for a PB, and that I was going to take it easy because I’ve got the Larne Half next Saturday?

Not only did I beat my time in last year’s event by almost six minutes but I whacked nearly five minutes off my 10k PB, the same personal best that I set less than two weeks ago in London without really trying.

Today I did try, and I well and truly smashed it!

As ever, I’m not entirely sure. I travelled to the race with Lisa, Elle and Aidy from the club and, as per the race instructions we parked at the Odyssey Arena which was a mile away from the start at the City Hall.

Normally, with half-an-hour to spare to kick-off, I would have dandered across and tried not to expend too much energy. However, Elle is the club female record holder for the London Marathon so she knows her stuff and, on her recommendation, we ran into the city centre.

It would be a good warm-up, I was assured. I was sceptical. I’m firmly of the belief that I have only so many miles in my legs on any one occasion and I wasn’t going to waste them on a warm-up.

But run we did and, you know what, it was alright. It was a bitterly cold morning, but it warmed me up nicely for the start. I just might have been converted into little running warm-ups from now on, rather than solely relying on my usual series of stretches etc.

Anyway, so what of the race? Instead of my usual preference of starting at the back I decided to embed myself in the main body of runners, partly to keep warm and partly to see what would happen if I allowed myself to be dragged along in the early stages.

It seemed to work a treat. Yes, plenty of runners still passed me but I was still going faster than I would have had I lined up further down the field. I decided to try to stay with everyone for 3km, see how I felt then and decide to either ease off or attempt to maintain that pace.

My second kilometre was a bit faster than the first. This was going ok, I thought. The third was a similar pace and I felt good so I elected to try going at this tempo for as long as possible.

The next couple of kilometres ticked over at the same pace. At the halfway point I was just a smidgeon outside my 5k PB but I didn’t really feel tired. I had settled into a nice rhythm and my legs were behaving themselves.

By this stage we were back into the city centre after having gone out to West Belfast for a while. I was back onto familiar territory, I could envisage the remainder of the route. In my head it didn’t seem too far, and I mentally broke it down into stages.

Past St. Anne’s, along the cobbles in the Cathedral Quarter, around the Custom House Square area, past the Big Fish, over the footbridge and into the Titanic Quarter for the finish. Wee buns.

And, to be honest, it was. I started to tire a bit but I kept pushing. Looking back at my stats, the second half was only a little slower than the first which is testament to the strength I still had in my legs.

By now I knew my PB was going to fall, and fall in style. It was only a case of by how much, so I decided it was a case of go hard or go home. I had dared hope of maybe knocking a minute off it … but nearly five? Really?

With the finish line in sight I usually make a sprint for it, to try to shave a precious few seconds off my time. I didn’t do that today. I had no need to. I just coasted over the line feeling immensely pleased with my efforts … and even though over 1000 people still finished ahead of me I felt as if I’d won the bloody thing!

I honestly didn’t expect this, and really didn’t anticipate going for it how I did – and what is especially encouraging is that I felt I had more left in me at the end. I wasn’t doubled over, I wasn’t breathing heavily and I didn’t feel drained.

This coming week will be one of consolidation, a few easy runs in preparation for the Larne Half. Miles, yes, but gentle, relaxed miles and, who knows, I may even study the start area to see whereabouts I could squeeze in a little pre-race warm-up! 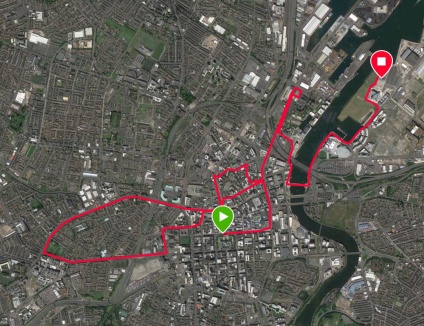 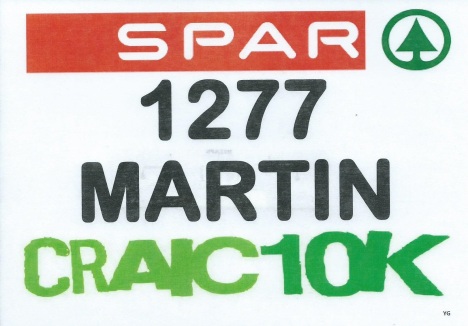