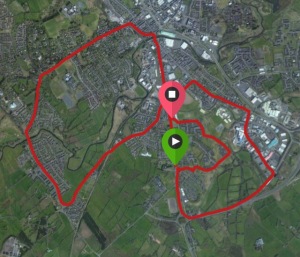 Today was the longest run of my proper training yet, 7.5 miles. I’d been running well this week, setting new GB’s (Garmin Best) twice over 5k and once over 10k but surely that couldn’t continue. Surely my long run would see me revert to type and struggle.

Did it heck! I don’t really know what went on out there but I bloody well smashed it. 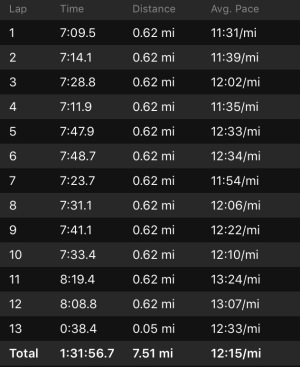 I went through the usual myriad of emotions before setting out. Plotting my route beforehand only served to make me more anxious. It looked so far yet it wasn’t anything I hadn’t done before lots of times.

My anxiety even went as far as deliberating over what to wear. Should I wear my official club top? After all, I’d paid £20 for the thing so I might as well get some use out of it. But what if I was having a stinker of a run and someone from the club saw me? Would I bring shame on the good name of the club? Would I be laughed out of town?

But, balls to it, I wore it. The chances were no-one would see me. It was early on a Sunday morning, after all, and my route would be pretty scarce of people.

Ha! Best laid plans and all that. I saw precisely two people, both of them club members. Sod’s law!

But it was all good. One of them approached me from behind and beckoned me to remove my earphones so we could have a little chat, which was good. We stopped for a little while, exchanged pleasantries, he encouraged me and off he went on his merry way.

Then, about a mile or so later, coming the other way I spotted someone I knew to be one of the club coaches. I don’t know him personally but I know he leads one of the tempo groups at Monday night training so, seeing him approach, I decided I had to at least try to look good. We didn’t stop as we got alongside each other but we gave each other a nod of acknowledgement and appreciation.

If nothing else, at least I’m being seen out and about and putting the miles in. That can’t do any harm, can it?

Anyway, what of this run today? Why was it so good?

Well, as I said at the outset, I’d set a couple of new GB’s for 5k this week, most recently yesterday morning. Scratch that. I only went and did it today again, taking another 38 seconds off it.

That’s not all. My next target was 5 miles and I came oh so close to setting a new PB, which has stood since November 2015. It was a bit galling to fall just outside it but, that said, I was a full five minutes quicker than my last 5-miler just two weeks ago.

And it goes on. Next up, my 10k record. Again, I fell just a little outside my PB but, and here’s the really pleasing thing, I was over ten minutes faster than last week. Yes, TEN minutes!

What was going on? Just what was this sorcery?

I’ll admit to easing up after this point, I had a mile or so left and I’d pushed myself all the way round so I coasted a little towards the end. I’d done the hard work after all and I’m in this for the long haul, so I need to leave a little in the tank for runs to come.

In a way I wish I hadn’t now because it skewed my overall pace a little but, then again, it does give me something to build on I suppose.

My last run over seven miles was back in October in preparation for the Great South Run and a quick comparison of my times today compared to then shows that my pace was exactly three minutes per mile quicker. That’s a massive improvement, even if I do say so myself.

So that’s week three in the bag. A very pleasing week and I feel that, maybe, it’s starting to come together now. In my mind I keep harking back to the end of 2015 as my running ‘glory days’. It was during that period that I set most of my PB’s and, largely because of injury, I haven’t really come close since – until, that is, this week and, specifically, today.

I’m trying not to get carried away but if I keep looking after myself and keep training hard I’m hoping that each one of them will fall before too long. I’ve got the Winter Run 10k in a couple of weeks so, depending on the conditions, I might just target that for a new PB. We’ll see.