If it’s Tuesday night, it must be circuits … such is my life at the minute. This must be what it feels like to be on tour.

And if it’s circuits then it must be a run to the class and a run back home afterwards.

This was my third week running the couple of miles from my house to the school for the class and, in that period, I have improved my time by some four minutes. I was three minutes faster from week one to two, and a further minute faster tonight. That’s pretty good, and a decent indicator of my (hopefully) improving fitness and weight loss.

The same can’t be said for the run home. Goodness, that wasn’t pretty! It was no surprise, though, given that I was absolutely exhausted from a very challenging class.

As per previous weeks we did Tabata sessions, only this time we had to pick a partner from another team so, for the hour that followed, we got very up close and personal with a complete stranger! Not ideal for someone as chronically shy and self concious as me.

Like I said, the run home was tough. Initially I had nothing left in my legs but by slowing it right down I regained some energy, eventually doing 6km in total. Not a massive amount but after a hard workout it was all I had left in me.

In other news, I finally entered the Born2Run Run Forest Run event this Saturday morning in Antrim Castle Gardens. It’s the nearest race in the series to my home, and will be my first race since New Years Day. It’ll be interesting to see how I get on given all the non-running training I’ve been doing over the past few weeks.

One day to do over 22km … that’s just over a half-marathon! Thankfully the challenge allows you to include distance completed on an exercise bike so I’ll add in my spin sessions this month, plus whatever running I’ll do on the 31st. I’m pleased to have done so much as it is considering the hectic schedule of classes. 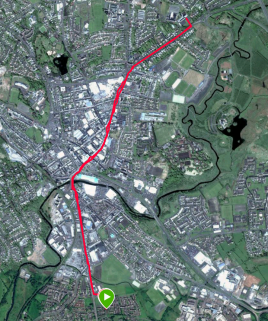