My first run in six days and very much a mixed bag.

I’d been feeling under the weather since Friday and this, combined with my trip to the National Running Show in Birmingham, meant that I had no real opportunities to run.

I felt a little better this evening, albeit still far from fighting fit, so I thought I’d give it a go by attempting a run to tonight’s Saints & Slimmers circuits class, and then a run back home again.

The run up was grand. Indeed, I was a full three minutes faster than the last time I did it a couple of weeks ago. This was promising. I felt good.

Then circuits hit me. They were tough. By far the toughest class I’ve been to yet. I still did my best but a combination of being weak from the lurgy coupled with the run to get there meant my energy reserves were totally depleted by the end of the session.

But, undeterred and very possibly foolish, I decided to run back home again despite a couple of offers of a lift. I had nothing, or very little, left in my legs but I figured this would be a good opportunity to dig deep – really deep – just to see what I could do when I was up against it.

It was brutal, it was horrible and I really didn’t enjoy it. But, even in the midst of questioning my sanity, I knew that a run like this that would benefit me. It never does any harm to stare adversity in the face from time to time, to remind my brain that when the going gets tough that I do have it within me to keep plugging away.

I knew before I left that I was weak, that the double run either side of an intensive workout would be really difficult but it did my soul a world of good to see it through to the bitter end.

So, just over 40km to go and a week to do it in. This is going to be tight but I’ve done a marathon in a week on a few occasions now so it’s nothing I’m not capable of. Little but often. 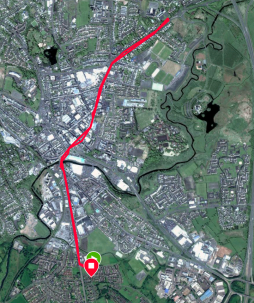