A couple of weeks ago I wrote that I went with the club 30 minutes group more by accident than design because I was too busy chatting as everyone was leaving.

Guess what, it happened tonight again!

There was quite a large crowd still in the Leisure Centre so, only half paying attention, I assumed that my intended 45s hadn’t gone yet – but by the time I realised what was going on it was too late and I was in with quite a large group of 30 minute runners.

But it turned out to be grand. It was quite a diverse bunch ability wise so there was, in effect, a couple of sub-groups within containing quite a few of my regular running buddies so I was perfectly happy to stick with them. It’s as much about the social side of things as it is the sport, and the social side has really come to the fore lately.

My thighs also felt quite heavy after my weekend running so maybe it wasn’t a bad thing to be cautious anyway.

We were told as we set off that we’d be headed for Princes Street which is the steepest climb in the town centre. Amid much moaning and groaning for a lot of the others I actually welcomed the thoughts of it.

I used to include Princes Street in my marathon training but haven’t been there for a few months so I was quite eager to give it a go. Turning the corner at the bottom a switch flicked within me and I went hell for leather up the hill, putting every ounce of energy I had into it – and was very pleasantly surprised by how well I coped. I did start to struggle a bit near the top but I kept plugging away.

It did drain me a fair bit for the rest of the run so I slowed it down after that albeit not completely. Indeed, it was reassuring that I didn’t wilt completely despite going flat out up the hill.

That said, normally I would run home afterwards to make up my miles but tonight I didn’t have the energy or desire for that. Not that it was a particularly big deal, I know I’ve put the effort in over the last three days so I’m quite content with that. 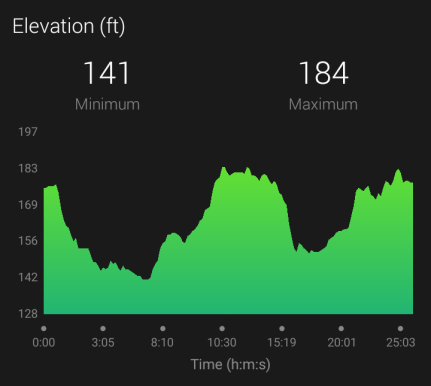