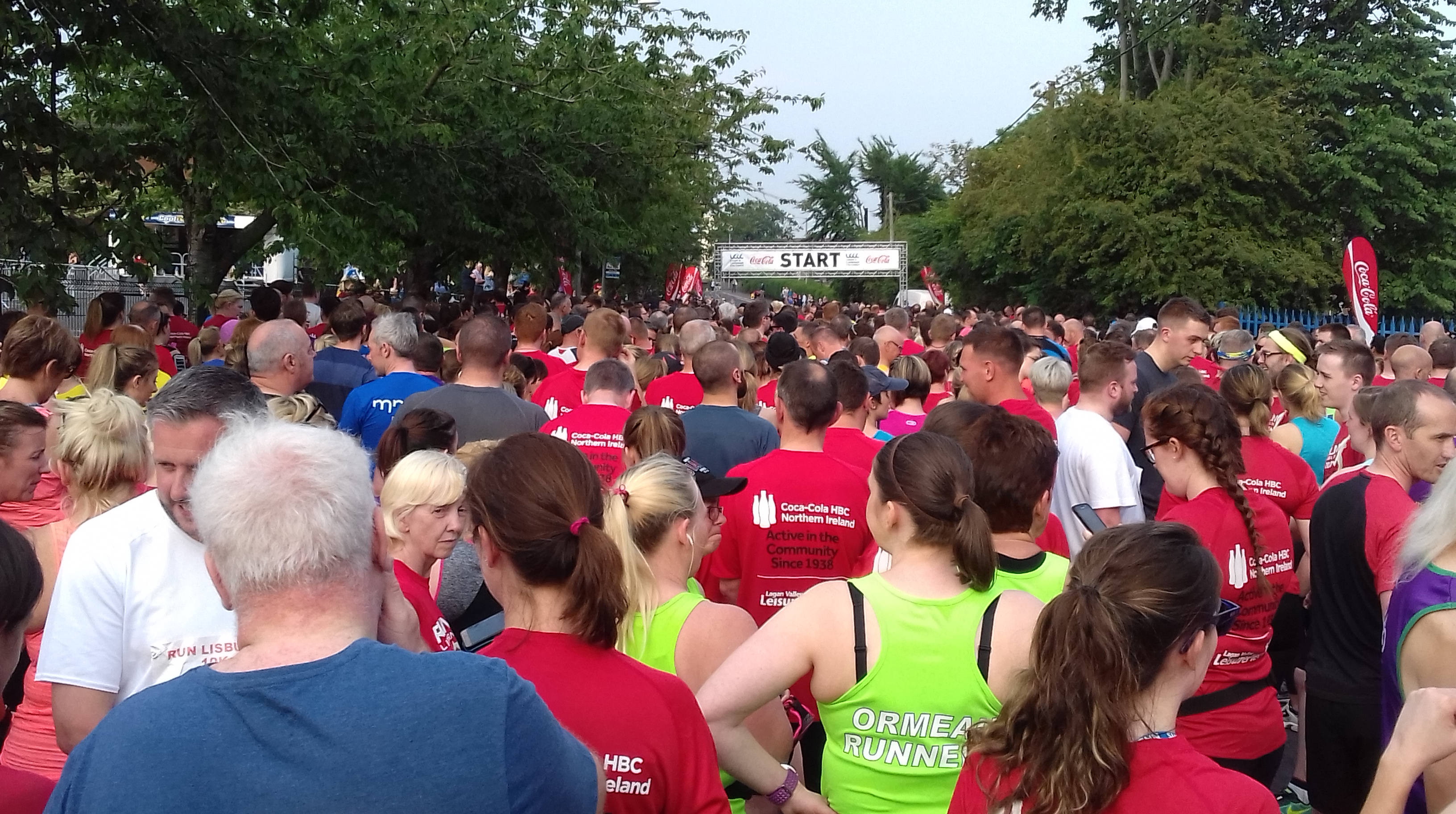 Goodness me, that was a tough one.

The latest race in my calendar was the Run Lisburn 10k, which was part of an overall event including the Northern Ireland Half Marathon Championships. The 10k was also the latest in the season long Novosco Grand Prix series. As such it felt like a big occasion which, indeed, it was featuring around 6000 runners spread across three runs (the other was a 3km fun run).

First of all, the cold hard facts … I finished in 1:20:46, my slowest competitive 10k to date. That disappointed me. Some of my mile splits were on par with the later stages of the marathon. However, I wasn’t the only one, I heard quite a few other people saying the same about their own runs.

But I’m not going to beat myself up over it … there are a couple of extenuating circumstances for that, namely the twin perils of heat and hills. Oh, and throw in a bit of chaffing for good measure – you can use your imagination on that one!

The event was described as ‘fast and flat’. However, as one woman so eloquently put it in her best Jim Royle, “Fast and flat, my f**king arse!”

The hills weren’t huge in the grand scheme of things but, combined with the heat and humidity of the evening, they presented quite the challenge in places.

I don’t know Lisburn at all, so the route was all new to me. There seemed to be a climb just after the first kilometre and then another one just after that, which set the tone for the entire route. I knew then it was going to a difficult run, especially since I was really glad to see the first water stop only a few minutes into the race.

My splits got progressively slower up until the 5k point. My calves were troubling me, the climbs troubled me, the heat troubled me – all combined meant it took me a while to settle into it, longer than I’d have liked.

After the halfway point, however, I began to adapt a little more and my splits started to improve. They still weren’t great, but at least they were going in the right direction.

It was a night when PB’s weren’t an option, it was all about finishing. I wanted to finish well. And I did, out of the 10km splits my final one was my third fastest of the evening, surpassed only by the opening couple as you’d expect.

Despite the time and despite the conditions I was an enjoyable night, I had a good time. I travelled up with a few ladies from the club and, once there, we met up with a fair few other members too. It was nice to be part of the team, to see familiar faces and chat beforehand and analyse things afterwards.

I also bumped into one or two people I hadn’t seen in years from other parts of Northern Ireland and whom I knew only through football, so it was interesting to see them involved with running too.

To conclude, it was tough ‘un, I struggled, lots of other people struggled. It was well organised, it felt like a marathon, the support from the spectators out on the course was plentiful and the encouragement from those already finished in the final 200 yards or so was very welcome, something you don’t always get. Bring on 2018!