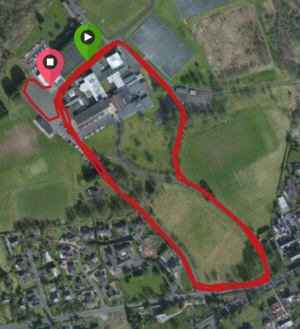 Anyone will tell you that it’s always important to prepare as best you can for a race. Take it easy in the hours beforehand, spend little time on your feet, allow yourself plenty of time to get the start and so on. All common sense really.

Common sense is something I lack.

Tonight was the first of three races this week for me, a 5k around a local school to celebrate the graduation of the latest C25K intake.

Usually before an event I do try to rest up as much as possible but, unfortunately, I didn’t do that today, partly my fault and partly due to circumstances beyond my control.

The day started off well. I chilled at home, worked some and generally took it easy. I had an appointment at my son’s school in the afternoon, a half-an-hour walk there and the same back. No problem, I thought, it’ll be just a gentle stroll.

And it was, on the way there at least. As for the way back … let’s just say that the hoped for gentle stroll home turned into a desperate dash due to, umm, stomach issues that would have none other than Paula Radcliffe herself sympathising with me.

Said issues stayed with me for the remainder of the afternoon and it was touch and go whether or not I would feel able to run. However, I thought I’d walk down to the venue anyway and see how I felt then.

So off on another gentle stroll I went, back the way I came earlier (the school and my son’s school are only a few hundred yards apart) until about half way along I suddenly remembered the start time had been brought forward 15 minutes. Oh bugger.

This necessitated another dash, thankfully for different reasons this time, until I reached the school grounds with about five minutes to spare.

But the fun and games weren’t over yet. Oh no, sure wouldn’t that be too simple? The start of the race was at the back of the school, atop a long, long driveway and all of it uphill.

Off I set again, eventually making it in time to get signed in and my number pinned to my shirt, all red faced and panting. I was knackered before I even started the ruddy race!

I had originally targetted this race as a perfect opportunity to train for Hastings and a possible 5k PB.

It was four laps of the school grounds, with one fast downhill section and one steep climb on each loop. My plan was to hurtle down the descent, take it slow on the flat sections before tackling the climbs. The climbs were the important part for me given that Hastings has lots of them.

However, given the circumstances, I wasn’t sure how I’d cope. To be fair, the first two laps went very much to plan. In fact, in hindsight, I probably took them too fast. On fresh legs it wouldn’t have been a problem but because my legs were already shot to bits it was probably foolhardy to go as fast as I did.

And I paid for that on the third and fourth laps. That said, I still took those climbs well. In fact, all four climbs pleased me with how I coped with them.

Timewise, I was about a minute outside a PB but if I had arrived earlier, had more time to rest and didn’t have to endure my earlier issues I’m pretty certain I would have beaten it. All in all, I was pleased with my performance though, I had achieved what I wanted to with the inclines.

Next up, two non-running days before tackling the Spar Craic 10k on Friday morning, and then Hastings on Sunday.

If you’ve enjoyed following my progress so far could I be so bold as to ask you if you’d consider making a donation to my chosen London Marathon charity this year – Asthma UK? No amount is too small, and all donations are received with such heartfelt thanks. My fundraising page can be found here. Thank-you so much.