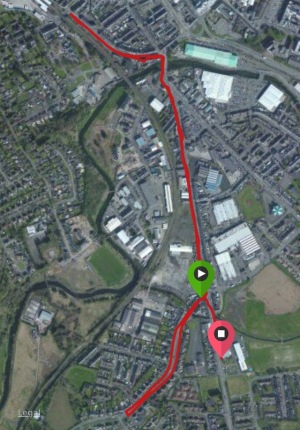 So week five of the Ballymena Runners C25K programme, with this week being a consolidation week and just repeating last week’s schedule.

That meant tonight it was 3-8-3-8 with two minutes of walking between each running segment.

Seven days ago it felt tough, tonight it was a breeze, it really was. I hope that doesn’t sound pompous but there was a vast improvement in the two runs.

I went so much faster and felt so much stronger, in fact the last segment was even a sneaky nine minutes and I still had plenty in my legs, even fitting in a sprint finish at the end going from the back of the pack (due to the constant turning round) and blazing a trail to the front! It felt good to put the pedal down and go for it.

Unfortunately the overall stats won’t reflect the speed because there was a lot of standing about at times between the running parts as the group came back together again, although drilling down into the figures it revealed that at times I was going over well 6mph and maintaining it for a spell.

What made tonight even better was that the first parts were uphill, clearly my three miles of hills on Sunday paid off as did my entire week of running.

It really does feel that it’s all starting to come together.