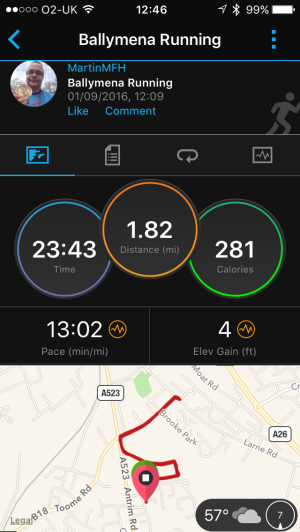 The schools are back. Summer is officially over. Woo-hoo!

So what better time to restart and reboot my running mojo? Only managing six runs in August was utterly pathetic, is it any wonder I wasn’t getting any faster or showing much progress?

Psychologically, perhaps, I’d switched off. August is my busiest month workwise. I was tired but not sleeping well. It was (generally) warm, April 2017 seemed such a long way away – and other such feeble excuses. I hated myself too. Hated myself for not going out more, especially on days I’d planned.

So a new month and all that, and the switch from summer, might just be the kick up the arse I need.

To that end, I went out late this morning. Before I did I went through a 10-minute warm-up (I was at home alone – apart from the cat, who wisely hid once she saw my attempt at a lunge) ….. the run itself started very well indeed. An even faster than before first kilometre followed by a reasonable second one – it was all good.

Then I got a phone call that I had to take (knew I should have left it at home) and then a sudden heavy downpour broke my stride and concentration so I decided just to run home. I was only out in a flimsy t-shirt and shorts, no point in catching a chill. If I’d been wearing my running jacket, hat and gloves etc. I’d have ploughed on.

All in all, though, I was happy enough with my efforts. Frustratingly, it looked as if I was on target to dip below 40 minutes for 5km for the first time in ages ….. ah well, I can use that for motivation next time.

So why did it go right today? Doing a proper warm-up? No fluid in my legs (I’ve been wearing my tights for the past few days)? A better mindset? Probably all three.

Let’s do this again tomorrow. Maybe.