Given my foot strike issues last night I thought I’d revert back to my old trainers tonight … and what a difference it made!

At the minute, if it’s a Tuesday that means the club C25K programme in Cullybackey.

It was a rotten old night, cold and wet, but I haven’t missed a Tuesday night yet so I wasn’t going to use a wee bit of rain as an excuse!

This was week four, which meant splits of three minutes, eight minutes, three and then eight. For those following the programme for the first time this is always a big step up so it was good to see 60 of them turn up given the conditions.

I didn’t act as a tail runner this week electing, instead, to run in the middle of the pack which suited me because then I could chat with those around me, to find out how they’re getting on with their running and so on.

Tonight also gave me the opportunity to test my niggles back in my old trainers and, as I suggested in the opening sentence, it went well tonight. My run was a lot more comfortable, my foot strike felt true and, to be honest, I just coasted along whereas last night I really did struggle to get going.

It’s clear now that it’ll take a wee while for my new trainers to adapt to my feet (or vice versa!). I’ll have to work at it and I will gradually introduce them more and more into my running but, for now, it’s reassuring to know that seems to have been the issue lately, and not anything more serious. 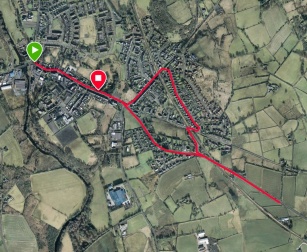