I’ve been a lazy sod lately. I haven’t run for six days and that, for me, is not good. It invariably means I’ll gurn and moan on my next run, it means my next outing will be a disaster of epic proportions.

Except tonight it wasn’t. That’s right, dear reader, I went for a run for the first time in almost a week and won’t be complaining about it!

I haven’t run since Carrick on Sunday because I’d lost the motivation. Well, that and work … but if I was sufficiently motivated I’d have found the time.

As the week went on my self belief waned. The old worries that I wouldn’t be able to do it again began to resurface. The fear that I’d go out and be totally and utterly useless became more and more real. All logic went out the window.

But I have a race tomorrow, the Laganside 10k, so I simply had to get out beforehand … and what better time to do it than at the last possible moment on a Saturday night on the eve of said race? As I said, logic ….

Moments before I left the house the red mist descended because of a work related matter that annoyed me much more than I should have allowed. In fact, it really pissed me off.

Running angry is never a great idea, is it? That and my aforementioned lack of practice was surely a recipe for disaster if ever there was one.

However, instead of going hell for leather, a sense of sheer bloody mindedness kicked in.

Because of tomorrow I wasn’t intending to run for too great a distance so decided that I’d just run almost a complete loop from my normal starting point at Drumtara, up to the roundabout, along the dual carriageway, through the industrial estate, down the Larne Road before turning onto the Wakehurst Road and stopping at the garage for a couple of minutes cool down walk home

It was 2.5 miles, slightly shorter than my preferred minimum, but that didn’t worry me tonight. I’ve got bigger fish to fry tomorrow.

And I decided I’d do it without walking, not even for my usual picture taking session. Instead I’d just keep going regardless of the pace.

There were two reasons for this … one, I wasn’t going to let the work irritation beat me and two, I had asked Dawn earlier in the day to message me to kick my arse out the door at 7pm.

As it happened, I was out a couple of minutes before that but she wasn’t aware and therefore messaged – and when she did I immediately thought of her efforts in Dublin a few weeks ago which inspired me to keep going. She managed, despite so many hurdles, to dig deep and keep plugging away so why couldn’t I?

The route was really uninspiring with many long, straight sections along largely totally deserted roads – I didn’t see one other person – and with some sharp little ‘bumps’ to test me but I was determined to keep going despite my brain screaming at me to stop.

Strangely, my legs behaved themselves tonight and felt grand, maybe that’s because I started off so slowly even if I did pick up the pace as I went on – and that’s an encouraging sign in itself.

So it all bodes well for tomorrow. If I can keep a similar pace in the early stages of the race and get over that troublesome first 20-25 minutes I might just do ok. I’m certainly not as worried about it now as I have been. 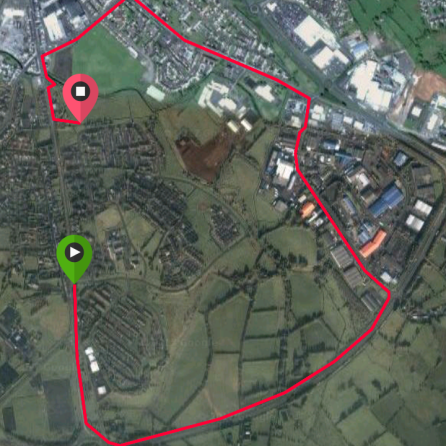