Yep, that’s by how much I set my new 5k PB by ….. a far cry from the moaning, groaning and complaining out of me over the past couple of weeks.

A big part of this was my new Garmin Forerunner 235, this was my maiden run with it so I wanted to push myself as hard as possible to see what new stats it produces for me. I do love a good stat after all!

As it was an inaugural run I’m not really sure what they mean or how they compare to ‘normal’ me but they’re a good marker to lay down. I’ll educate myself on VO2 max, HR, aerobic activity and so on over the coming days and weeks.

For now I’m just pleased to get a decent run under my belt. Very possibly the rain helped, this was more my normal environment!

My sole intention for going out tonight was to go to Sainsbury’s, so I thought I’d take a somewhat scenic route there.

Starting off as usual at the Park & Ride, I did a lap of that before hurtling down the Ballee Way, around the entire estate, a lap of the playing fields, up the Wakehurst Road, then the Larne Road and onto the Larne Road Link before stopping just before the shop.

As you can see from the route profile it was a down and up route, which made my time all the more pleasing.

I knew I was on for a good time but was a little bit pissed off before the end because I thought I’d blown it. I had to stop at the side of the road to let traffic pass and noticed after a couple of seconds that I’d forgotten to pause my watch. I wondered if those couple of seconds would spoil it for me, but maybe it was because of trying to make up for it that pushed me on to run as fast as my little legs could carry me over that final kilometre!

Glancing down at my time just as 5k ticked over it said 33:05 but it seemed like an eternity before the watch actually buzzed, and when I saw 33:06 I was gutted. I thought I’d missed it.

But, then, I saved the run and eagerly checked the Garmin Connect app on my phone.

It did. I fumbled to open my Personal Records page. Did I want to accept or decline a new record? Of course I did!!! I didn’t actually know how close it was until I got home and scrolled back to my previous PB ….. I improved from 33:06:4 to 33:06:2. Imagine how gutted I’d have been if it’d gone the other way! 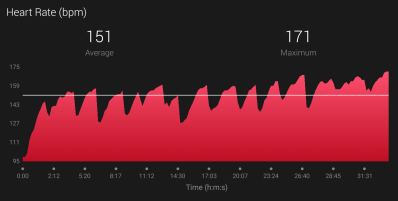