It was back to London this weekend for two races, the Westminster Mile on Sunday and the London 10000 on the Bank Holiday.

First up was the aforementioned Westminster Mile, an iconic route which takes in the last part of the London Marathon, beginning on The Mall at the point the marathon ends, past Horseguards Parade, along Birdcage Walk before finishing back in front of Buckingham Palace.

It’s a special place for me. I love walking around there whenever I’m in London and, indeed, as soon as I got word of my place in the 2016 marathon I deliberately avoided the area because I wanted my next visit to be when I finished the race, something I could use as an additional motivational tool when the going got tough.

Because I had already booked my place in the London 10000 the following day it was a total no brainer that I would enter this too.

It would be a fun, exciting event and would mean another medal! What made it even better was that I persuaded my eldest daughter, Michelle, to take part as well.

She doesn’t have very much running experience and this would be her first ever race. She also suffers from asthma and was an important factor in my #reasontorun for Asthma UK in this year’s marathon.

Even though she’s a total novice she is interested in taking up running so this was the ideal event in which to cut her teeth.

We’d spoken about it for weeks so it was great when the day eventually arrived.

I’m a sucker for a cheesy picture so, the night before, I couldn’t resist a quick snap of our respective running shirts after our numbers had been fixed on.

It was the same again in the morning. After taking the tube from our base at King’s Cross to Green Park I simply had to get a picture of our feet together with the timing chips attached to our trainers.

After a quick look around the pre-race village we made our way to the starting pens. Because we hadn’t booked at the same time we were in different waves. I was ‘D’, Michelle in ‘E’ but because our scheduled start times were only a few minutes apart we decided to see if one of us could ‘accidentally’ slip into the other pen.

It couldn’t have worked out better. I stood at the very back of my pen and Michelle stood at the front of hers, we were separated only be a bit of tape. As the waves in front of us set off the marshals lowered the tape to move everyone forward so Michelle simply stepped into my pen. No harm done and no big deal but it was good we would be able to start together.

Michelle is a young slip of a girl whereas I’m not – I’m not the quickest or the most svelte – so it was going to be interesting to see how we fared against each other.

I had hopes of breaking the 10-minute mark for the first time over a mile so I knew I’d have to set off at a fairly brisk pace but would that have been too quick for Michelle or would she leave me floundering behind her in a cloud of dust?

As it turned out, about halfway down Horseguards I could see Michelle struggling with her breathing so I told her to walk for a few seconds.

That was ok, and after a brief recovery, we resumed running but not long after that she had further breathing issues so another short walking break was called for.

At this point she told me to carry on with my run. I was reluctant to do so but because there were other people walking I was reassured she’d be ok and not left alone.

So I carried on up Birdcage Walk chasing a sub-10 time. Despite the shade from the trees it was a really warm day so it was perhaps a little tougher going than I had anticipated but I was making really good progress and I knew as I turned the final bend onto the Spur Road with the palace in front of me that I’d definitely go under ten minutes.

With the London 10000 in mind the next day I eased off a little, finishing in 9:42 and beating my PB by 25 seconds. I was delighted. I’m more of an endurance plodder and not particularly fast so to go below 10 was superb.

And what of Michelle? She came in at exactly 11 minutes, which was an amazing debut for her given her struggles. She said she’d chatted to a few people and they helped each other to the finish which was great to hear and so typical of the running community.

Not only that, but didn’t she go and get a flying feet picture? I’ve been trying for ages to get one of these and she manages it in her very first race! Pesky kids!

Afterwards we took another walk around the event village and bumped into a friend of mine from this year’s Asthma UK team, namely Phil Jefferies and his wife. It was nice to see him again and was the perfect end to a successful morning all round. 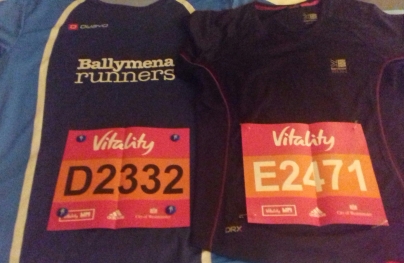 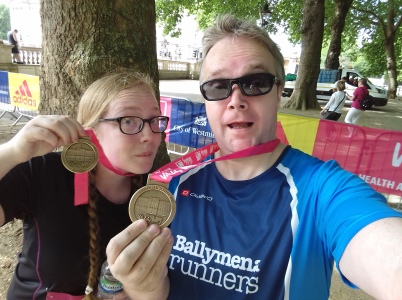