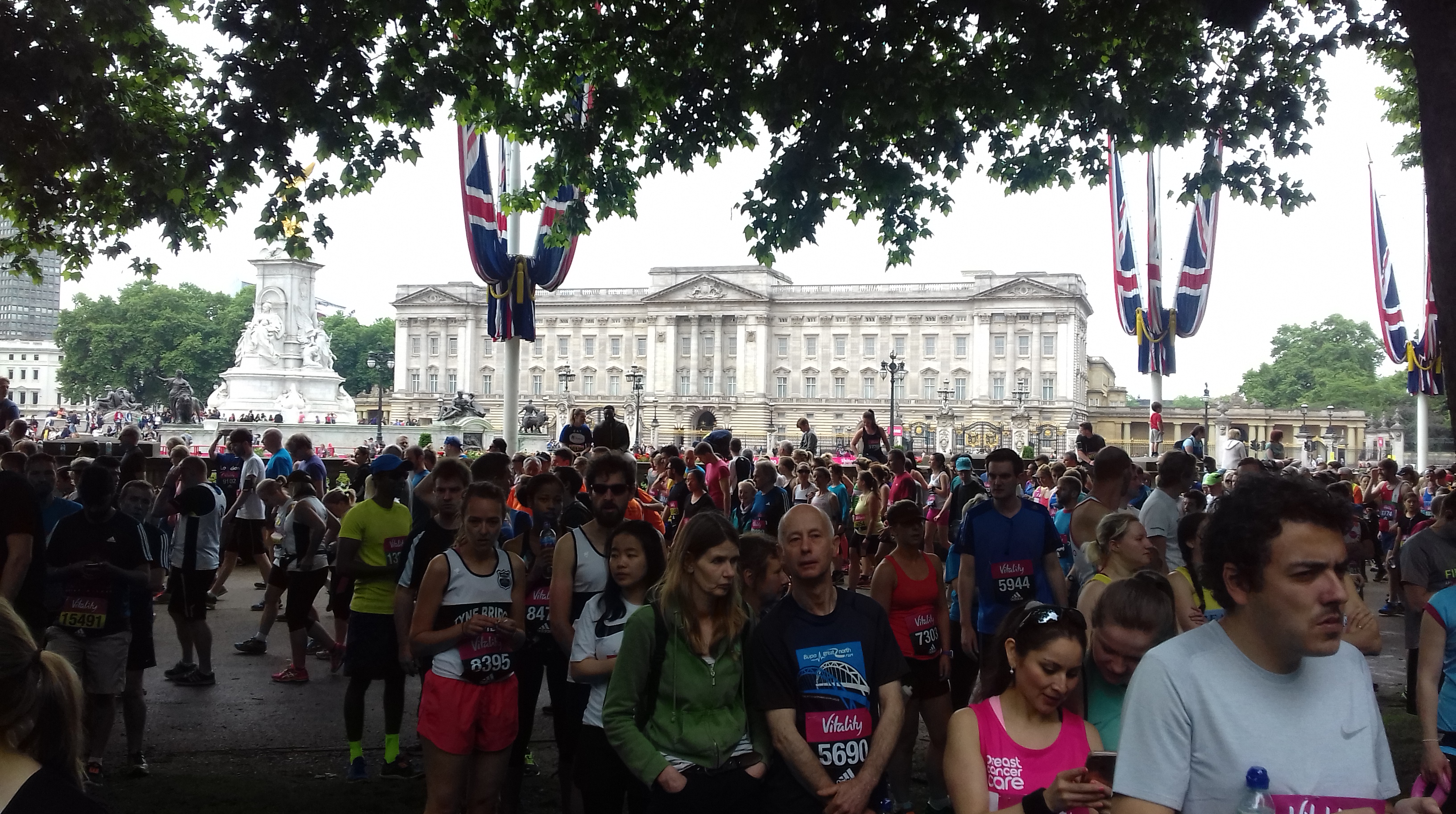 The second race of my two-run weekend was the Vitality London 10000, a 6.2 mile jaunt around the capital starting on the Mall, out to St. Paul’s Cathedral and back in to a finish just in front of Buckingham Palace … an iconic route just like the Westminster Mile 24 hours earlier.

In effect, it follows much the same route as the Winter Run back in February, it’s just the start and finish which really sets it apart.

Michelle, on this occasion, was just there to support me. It was nice, given the much bigger numbers involved compared to the day before,  that she was able to get into the event village again. She has tentative ambitions to run a marathon at some point, so experiencing the build up to a major race like this can’t be a bad thing.

Organisationally, it was all pretty slick. Green Park was crawling with photographers – we had our picture taken on five seperate occasions! – and the baggage drop area was very well handled, no fussing around.

If I could fault anything it would be the time taken to get to the actual start line. It took around 23 minutes after the leaders had left before I could get my race underway. I was in the yellow wave which meant I was near the back anyway, but in both my two London Marathon’s I was in Pen 9 and started both of them after just 15 minutes, once from the Blue Start and once from Red.

I had designs on setting a 10k PB so was eager to get going, and I felt good once I did. Running towards and then under Admiralty Arch was a lovely experience but just as I was getting into my stride I was forced to walk due to the narrowness of the roads around Trafalgar Square and the numbers trying to squeeze through. This happened on a number of occasions and upset my early rhythm, so much so that my first mile was easily 90 seconds slower than on Sunday.

But, of course, I had plenty of time to try to make up that lost time, and I did indeed go quicker in each of the two miles that followed and at the halfway point had managed to get things back on track, in fact I was just outside my 5k PB!

However, it all went wrong between miles 3 and 4 … basically the area around the Bank of England and St. Paul’s. It *is* the most elevated part of the course but there’s no climb to speak of so that can’t be the reason. I think I just expended too much energy trying to make up for lost ground during the first mile, coupled with the heat of the morning. It was hot out there!

I did recover between mile 4 and 5, going over a minute faster and again over the final mile but the damage had been done.

The finish was special again. I’ll never tire of running up Birdcage Walk. This was my fifth time running it, twice in the marathon, twice this weekend and once on my own when I ran the three historic finishes to the London Marathon, and the view of Buckingham Palace as you turn onto the Spur Road is always awe inspiring.

I was trying to keep one eye out for Michelle in case she was standing near the finishing line. I’d missed her at the marathon even though I apparently looked straight at her, so I was hoping not to do the same again.

At the risk of breaking into my best Britney Spears impersonation I *did* do it again. She had texted me to say she was standing on the right but my phone and Garmin had become disconnected from each other at some point so I couldn’t receive texts on my watch and therefore didn’t know where she was. I tried to guess and guessed left so ran over to that side. Oops!

I ended up going over a minute outside my PB and whilst it irked me it didn’t particularly annoy me. I knew where I’d lost it and, apart from that, was pleased with my overall performance. I felt strong and I’m getting stronger. I also had nothing left at the end, my legs felt as if I’d done 26.2 instead of ‘just’ 6.2 … that’s a good sign that I’d done my best.

Also, as I said at the outset, this was a very similar course to February’s Winter Run and I went four minutes faster this time so I’ve got to be happy with that, especially given the temperature.

As with everything else with the day the goody bag/medal area was a breeze to get through – an excellent medal, excellent t-shirt followed by a hassle free bag collection.

I thoroughly enjoyed both this and the mile on Sunday, all being well I’ll be back again next year for another bash at them. 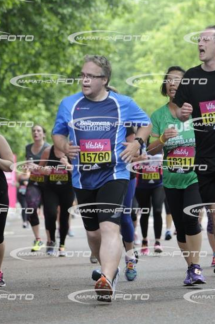 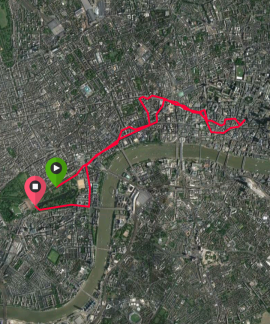