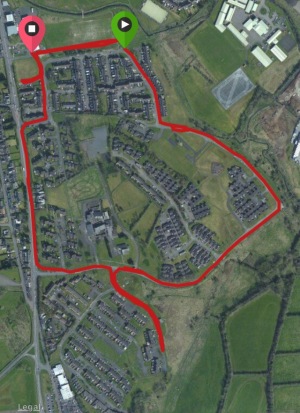 After the hames that was Sunday’s run I approached the latest Ballymena Runners instalment with no small amount of trepidation.

The schedule tonight called for three minutes running, two minutes walking and then a further eight minutes of running, repeated twice – quite a step up from last week.

Split into two groups tonight, instead of three – but still over 40 people turned up – I somehow found myself spat out the front of my group at the start, not what I wanted (!) so I was glad when the leaders made us turn back in on ourselves because it meant I could become anonymous.

Once I was back in the pack I just plodded along at my own pace, to the extent that there was a group out in front and another group at the back with me slap bang in the middle, almost isolated.

All in all it wasn’t a bad run. Although daunting, the eight minute segments weren’t that difficult with the second one actually being the better of the two …. by that stage the group had looped back on itself so many times that I back was out the front!

Ah well, seeing as it finished just across the road from me I would have looked good in front of the neighbours. Or at least I hope I impressed my cat watching from the dining room window!!! 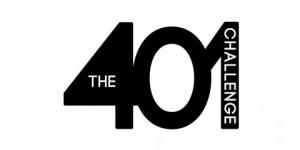 Tonight’s run was just over two miles, bringing me up to 9 for the 401 Challenge Virtual Marathon which means I can adjust my schedule for the rest of the week accordingly:-