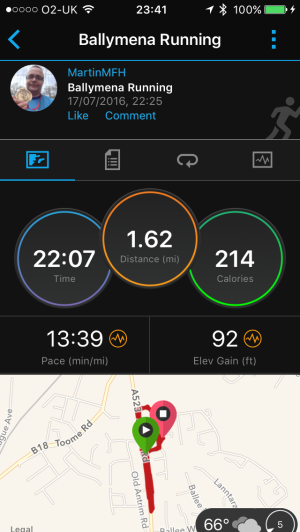 So I went out for a run tonight, my first in almost three weeks.

My last run was on June 27th, during which I hurt my right calf. I didn’t run for the rest of the week (except to the pub, in the rain, in London – but more of that in a future blog!), and nothing at all for the week after.

Today was, therefore, my last chance to run without missing a second complete week. I knew that and I tried to convince myself to go out earlier than the time I eventually did (10pm).

I felt fat. I’d eaten healthily today but I still felt fat. I was scared my calf wouldn’t hold up. I was worried I’d forgotten how to run. Again. That always happens after a gap. Excuses.

But I wanted to go out, so out I went, without telling anyone in case I’d change my mind. I decided to take it easy, starting with the most basic of Couch to 5k runs. I wasn’t sure how I’d get on, so being cautious was very much the order of the day.

As I said, it was 10pm so I thought I’d be fairly certain of not being seen. Wrong! How very wrong! I crossed the road to walk to my starting point and I bumped into two rather intoxicated chaps, one who knew me and one who thought he did.

That hurdle negotiated with an undecipherable grunt in their direction I continued to stroll to the start …. only to see someone else. I mean, what is it with people? It’s Sunday night, it’s dark, just kindly go away and leave the roads and footpaths to me.

I also wanted to run around the football pitches beside my house. There were young lads playing football. Now, don’t get me wrong, I earn my living from the sport and so encourage anyone to play it at any time …. but, when I’m out for a run, could you please just bugger off?

After finally getting some peace and quiet off I went, the first minute was fine, the walking segment was fine ….. but then the next running minute felt like it was taking forever to finish, so I checked my Garmin and realised I missed my split. Ah well, a wee bonus in my legs, perhaps a sign one minute splits is too basic for me.

I decided to stick with it, though, for the remainder of the run. My left calf (not the right one this time) hurt a little around the third or fourth running split but other than that everything felt fine.

At the end I lost count. I couldn’t remember if I’d done eight splits (as per the programme) so I decided to do an extra one just in case. It turned out I ended up doing nine but that was ok, it’s an extra wee run banked, no harm done.