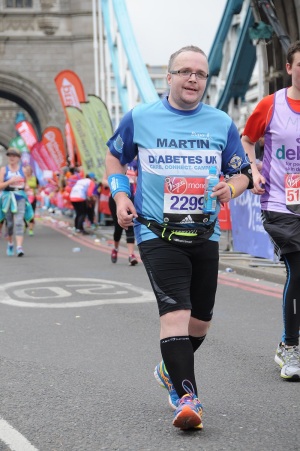 It’s something I’ll remember for the rest of my days, the thud on the doormat of my ‘You’re In’ magazine from the London Marathon people on October 1st 2015.

I’d more or less forgotten that I’d entered the ballot way back in May so it was with some surprise that, peering out my dining room window, I saw the postie force a magazine through my letterbox. I wasn’t expecting anything, so what could it be?

Picking it up, trying to read through the coloured plastic wrapping it dawned on me what it was. But it couldn’t be, could it? A few moments of disbelief and head scratching followed. Is this telling me I’ve got a place in the London Marathon? THE BLOODY LONDON MARATHON!!!!!!!!!

It was true. I was in. I wanted to tell everyone, to shout it from the rooftops. I remember going to my nearest supermarket that night to buy a running magazine and telling the cashier, so I’m guessing I most likely did tell everyone whether they gave a stuff or not!

Little did I know, my life was about to change in ways I’d never, ever imagined and open up a whole new world of adventures and experiences that I’ve come to treasure.
I wasn’t a runner. I still don’t class myself as one, not really.

Up until that point I had participated in a couple of parkrun’s, a fun run and had never gone more than three miles. But, now, I had a marathon to prepare for.

At that moment in time I was nearing the end of the C25K programme I was putting myself through so I decided that, for now, the best thing was to complete it before turning my attention to a proper training regime.

Everything went well for the first couple of weeks. I was so motivated. Training was easy. I was going to be in London for a couple of U2 gigs at The O2 so whilst there I went to the official London Marathon shop near Liverpool Street station. They must have seen me coming a mile off because one hour later and £150 lighter I emerged with a fancy new pair of trainers and a set of custom orthotics.

And, because I was in the city, why not indulge in a little run? So, the next morning, off I went at 6am around the streets of Shoreditch near my hotel. It was dark, it was cold but there were loads of runners out and about. This was fantastic! Usually I run at home without seeing another soul, so to bump (not literally!) into others out doing the same was amazing – and it whetted my appetite even more for the big day still months and months away in April.

One of the things I love about London is the walk around The Mall, Buckingham Palace and St. James’ Park. I vowed after returning home from my trip that the next time I’d be there would be on marathon day. I was due to be in London at least a couple of times before that but I’d ban myself from that part of the town. I wanted to experience it next as a marathon finisher.

As events transpired over the months that followed what a motivating factor that would become.

I’d mentioned training was going well. On reflection, it was going a little too well. I made the classic rookie mistake of doing too much, too soon …….