Back to parkrun today, and after my gentle outing last night, I felt a lot more confident about it than I know I would have been if I hadn’t bothered on Friday.

It just goes to show that it really pays off to face down your demons as much as possible even if it does feel like an almost impossible task at the time.

Anyway, parkrun … my old bones felt a bit creaky this morning after my relatively late run the night before but the 40-odd minute walk to Ecos soon sorted that out, and I felt pretty good lining up at the start.

I went this morning with a definite plan. I wanted to approach this one in a much more structured, controlled way than I normally do. My usual tactics are to go hell for leather from the off, and then hang on over the final mile in an attempt to record something approaching a time that won’t frustrate me!

So, today, I started off almost at the back and slowly worked my way past a few people in a methodical manner. For example, one bloke said he was running to 36 minute pace and whilst that was slower than I would have liked for myself I stayed with him for a short while in a bid to save my legs a little for the latter part of the run.

And it worked a treat. As I said, I started at the back but didn’t panic. I managed to get into a comfortable rhythm and tucked in behind one runner before moving onto the next one and so on.

The idea was to remain consistent throughout. Mile one came in at 11:11, but that was ok and even by then I had worked my way past a few.

I slowed by 24 seconds over the second mile, but this was deliberate in order to save my legs for the final push. Normally at parkrun my earlier efforts leave me struggling a bit over mile three so I wanted to see what I could do whilst having something extra left in them.

What a difference it made! I completed the third mile in the same time as I’d done the first which resulted in catching and passing quite a few ahead of me. It was a strong finish and, according to Strava, my final kilometre was my fastest ever at a parkrun event.

Overall, this was my fourth best parkrun time (and my third best at my home event) which, for a purposely controlled run, was a pretty good result.

I felt a lot fresher at the finish, and probably could have increased the pace a little throughout. I also learnt today not to stress too much about trailing at the beginning, and to trust in my own tactics. Today was a good day. 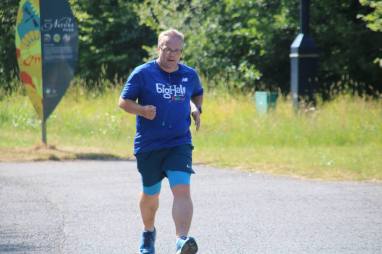