Yesterday (Friday) I picked up my new trainers, Hoka Clifton 4’s for the record, so was eager for a run to help break them in.

However, I couldn’t really be bothered with a run just for the sake of a run so I needed something to go to.

I did consider my local parkrun but because I’ve got a half marathon tomorrow I wondered if going as hard as I could in an event would be a good idea? Now, I know there’s no law that states I have to give it everything at parkrun – in fact, that probably goes against the ethos behind the entire movement. But still I needed a run and I didn’t know if I could trust myself not to run the full thing.

Then it occurred to me … the Cullybackey Cosy Sofa people have their third run of the week at parkrun so I decided to run there, join in with them and run back home again. Nice and gentle, no pressure on me to produce a time and a decent distance to boot. Clever Martin! Sensible Martin!

So that’s exactly what I did. I know Hoka’s. I’ve been wearing Clifton 3 for the past year but despite being used to them I knew I needed to take some time to mould the new pair for my feet … and I also knew that it’ll still likely be a wee bit uncomfortable at the start, despite the shoes themselves presenting no problems.

It was great to feel the ‘bounce’ again, it was amazing to sense the flow of my footstrike from heel to toe. I’d forgotten just how good a new pair of trainers felt.

My legs also felt a bit of burn in them again, particularly around the ankles once more, so I made sure to take it very, very easy. Was the burn due to the heat, or was it due to the new shoes? I reckon, on this occasion, it was the latter and I fully expected that. I remember this happening before. That’s no reflection on the trainers, I’m unlikely to ever wear another brand – I just need to break them in.

That aside, the run itself was fine. I took the back route to Ecos, avoiding most of the town centre. When I arrived I briefly toyed with the idea of actually doing the parkrun but I was firm with myself that it wouldn’t have been sensible. It might well have gone ok, but if it doesn’t go well tomorrow I’ll be blaming it on this so I thought it best to remove any doubt or possibility of today being a contributory factor.

The Cosy Sofa group was good. Not as many as Tuesday night, but that’s to be expected, but still a decent turnout. It was nice to run at the back again, this time with Yvonne, to chat and catch up, and also to chat with and encourage others.

We ran as far as the footbridge, doing 4x4x4 with two minute walking breaks, at which point I turned off for Suffolk Street and the run back home. Thankfully, this was a lot more comfortable on my ankles than the run there, an encouraging sign.

All told, I did five (slow) miles this morning which I thought was alright in light of another half waiting for me tomorrow. A reasonable warm up, and a good introduction to my new Hoka’s! 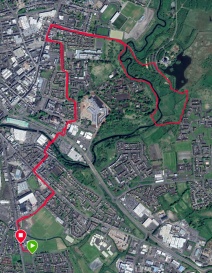