So what better way to smash the myth that is Blue Monday than by pulling an 8-mile run out of the bag?

Tonight was my first night back at the club for a wee while, possibly over a month, and I wasn’t really feeling it. I trudged up the road like someone going to face a punishment and trying to hold off the inevitable for a few precious seconds longer.

When I got there it was nice to see a few friendly faces asking where I’d been and so on. I’ll admit to being a bit nervous, mainly through self-doubt, and made my mind up to go with the 30-minute group. My last outing was with the 60s so you can see how reluctant I was tonight. It wasn’t that I couldn’t do the 60s or even the 45s, I just didn’t believe I could.

Thankfully the 30s was a reasonably large group tonight. I had visions of it being just me and the leader!

It might have been the 30s but it wasn’t an easy run! Apparently last week (I didn’t go) was a nice flat route so tonight Stephen decided to throw in his old favourite – Princes Street – into the mix, followed by the long steady rise that is Parkway.

Normally, when faced with Princes Street, I see it as a challenge and sprint up it. It’s bloody steep but it never beats me. I enjoy running up it as fast as I can even if it does leave me exhausted at the top.

But not tonight. I resolved not to sprint it electing, instead, to take it very easy. I almost forgot myself at one point but after a few yards remembered and dropped back down to a trot again!

All told, it was a very pleasant half-an-hour. I deliberately kept it at a gentle pace.

Returning to base, after the cool down exercises, I took this mad notion to start running again. I had done almost 3 miles with the club, so I decided to stretch it out to 5 miles … once that came then it was 10k, once 10k came I remembered that I need to do 12 point something km to get to the halfway point in my January 100k Challenge, so I pushed on to 12 only to realise that I was only 8oom short of doing 8 miles, so that’s how I ended up doing the distance I did.

It was a rotten old night, quite heavy rain, the odd sleet shower and ice was beginning to form on my gloves by the time I’d finished but I felt quite comfortable within myself.

I picked up the pace after going solo, which really surprised me because I normally drop my speed on my own. In fact, apart from the last 2km when I was running round in circles near my house and slowed down a bit just wanting it to be over, I kept to a consistently decent pace throughout and certainly not one I was expecting. No complaints though!

So that’s me just over halfway at the halfway point in the month … keep ‘er lit! 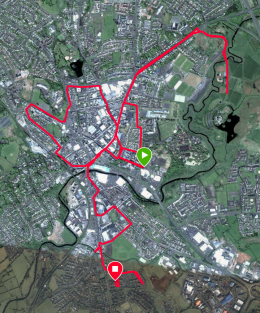