… because tonight I achieved a PB! Woo-hoo!

This evening I went out on another training run with three other members of my Belfast Marathon relay team (Karen, Iverene and Parveen), increasing the distance to five miles from last week’s four using a route devised by Judith who, unfortunately, has been ill for the past few days.

It was also my first run with a head torch, which promised to be an interesting experience.

We started off at the Countryman’s Inn, at the very opposite end of the town from me, and set off along the Grove Road which – thankfully – was mostly downhill.

Going onto the Fry’s Road, the downhill continued until we got to the bottom and turned right to go onto the Broughshane Road … and that’s where the fun ended!

We trudged up to the top of the road to the bottom of the Cushendall Road, cut through the Demense Estate onto Thomas Street, down Parkway, did a loop of the little row of houses before turning to go up and up and up the Ballymoney Road!

But, bugger it, we were 400 metres short! So back we turned for 200 metres and then returned to the carpark for a quick lap. That was bizarre enough, but at the end we then did our cool down exercises which I’m sure must have looked absolutely terrifying to anyone passing … all that squatting and stretching in a pub carpark, and not a drop of alcohol amongst us!!!! However, it was a fun end to a fun evening.

I set the pace for most the of the night. That was because I knew the route better than the others so they let me take the lead – it also helped me go at the speed I did, I could feel the others just behind me and it spurred me on, partly because I didn’t want to let them pass me – although I found out later they were following me because they wanted to push themselves, so we sort of worked with each other!

The route was quite challenging in places so I was absolutely delighted at my time. I knew I was on course for a PB going into the last mile or so which was also at the top of the long climb but yet I pushed on and on, finishing quicker than I’d started.

I was very conscious about perhaps pushing the others too hard at this stage but they stuck with me so I was absolutely delighted when it turned out to be a PB for us all. Personally, I took 16 seconds off my previous best 5-mile time. As runs go it’s hard to get much better than that! 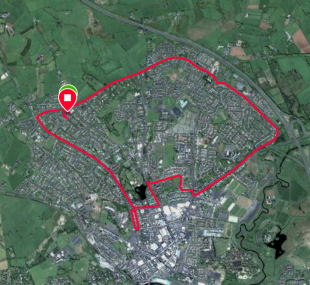