What a successful weekend of running that was!

The latest in the Rock ‘n’ Roll Marathon series was taking place in Dublin and after discussing it with my friend Dawn we decided to make our way to the Irish capital to take in some of the races being held.

This is the story of the 5k.

Arriving in the city on Friday we immediately went to the packet pickup in the classic grounds of Trinity College in the heart of the city. I was also staying here, and it definitely added a sense of grandeur to the entire experience.

Registration etc. was extremely swift and straightforward and in a matter of minutes we had collected all our various documents, race numbers and so on. Indeed, that efficiency was more or less the case across the whole weekend.

I say ‘more or less’ because the only real hitch of any description came on Saturday morning when trying to make our way to the famous Phoenix Park for the 5k. As we collected our number we were given ‘final’ instructions which, amongst other things, detailed transport options including shuttle buses to get to the starting line.

Unfortunately, at least in the case of the 5k, these instructions contradicted themselves. We arrived at the designated stop and met a man from Spain who was also waiting. Pretty soon a chap who had done the RnR Liverpool event turned up, followed after that by a couple from Birmingham or thereabouts, judging by their accents ….. all of us in the correct place as per the instructions.

What made this noteworthy is that we kept bumping into these same people over and over again during the weekend. There were thousands in Dublin for the various races yet we kept seeing the same people. What were the odds of that happening? It was quite amusing really and also good to follow each others progress.

After a short discussion we determined that no bus was turning up and that the instructions were wrong, so we all made our way to the nearby Luas stop to get the tram to Heuston Station on the other side of the city centre whereupon shuttle buses *were* waiting to take us the short distance to the starting area.

I should say at this point that Dawn is very new to running. She has recently completed a C25K programme at her local club, and had only ever ran two 5ks – a Race For Life and her nearby parkrun – both in the last few weeks.

On top of that, as an asthma sufferer, she finds it very difficult to regulate her breathing whilst running, attends regular physio sessions for a number of leg and foot issues and less than a year ago went through shockwave therapy to treat a serious Plantar Fasciitis problem.  The fact that she runs at all is nothing short of astonishing.

I mention all this because it’s very relevant to what followed.

As we wandered around the starting village I could notice Dawn getting very nervous. This was a huge event for her. She was worried about her breathing, the tightness in her calves, her Achilles …. and she was also warning me that she’d be rubbish, a far worse runner than I thought she’d be, grumpy, slow and so on.

I am no stranger to pre-run ‘sick with worry’ nerves and our finishing time didn’t bother me in the slightest. My only concern was staying with Dawn from the start line to the finish, and doing what was required to get her through. This was all about her.

The race itself was a triumph, it really was.

We set off at a steady pace …. and just kept going. That’s right, we kept going. Apart from one very brief section of around 200 metres at the bottom of a slope Dawn ran the whole thing. I’m pretty sure that faced with the same route again she would tackle the rise because there was another one shortly afterwards that she did run up, almost getting to the top before even realising it was there!

And not only did we keep going, we got faster in the second half of the run, started to pass quite a few people and finished inside the time Dawn had predicted for herself.

Coming down the long finishing strait was a special moment, a goosebumps type of thing, knowing that Dawn completed it and absolutely smashed it.

In my mind I likened it to how I felt turning onto The Mall at the end of the London Marathon. I felt so much pride for Dawn, knowing what it would have meant to her, such a massive accomplishment.

Personally, I had no doubt she’d do it. I had total and utter confidence in her. A massive well done from me. Excuse the pun but she absolutely ‘rocked’ it. 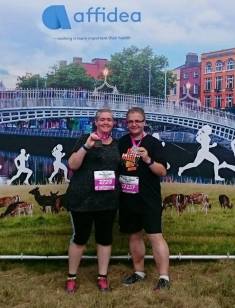 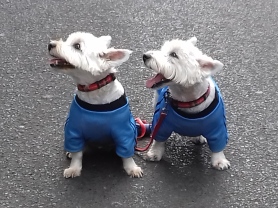