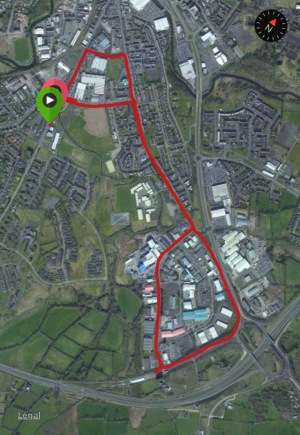 So, run three of week three and for the third time in six days I set a new record for my Garmin, shaving another 36 seconds of my 5k time.

I didn’t feel mentally capable of doing a run yesterday – as per my plan – so I thought I’d rescue it by going out to parkrun this morning. That’s an option I’ve built into my plan but I woke this morning not really feeling capable of that either so I went back to bed, hating myself for doing so.

But that’s not an excuse. If I give in to my moods, feelings and insecurities I’ll get nowhere so I eventually dragged myself out the door at around 11am, not expecting much. In fact, I toyed with the idea of doing a simple single kilometre and going back home again.

I’d gone out without my earphones. I couldn’t find them which put me in even worse of a mood plus I realised early on my watch had reverted to measuring my distance in miles, which also pissed me off. I normally have it set for km splits but it must have downloaded an update and reset itself.

Everything was working against me. This is going to be rubbish. Give up Martin.

However, I didn’t. My time for that first kilometre was pretty good so I thought I’d push on for a second one ….. and when that was also good I knew I was on target to perhaps break my Garmin record.

Even km3 – during which I really struggled – was within my preferred range so I put the foot down and blasted through the last couple, each one almost being as fast as the first.

I’ve no idea what happened today. I didn’t run ‘angry’ and I didn’t set off with any designs on setting a good time. I suppose I can only put it down to my training kicking in.

It was pleasing to record a good time, still a way short of my PB but I’m getting there.

Today’s time also saw my predicted marathon time dip to just below my target time, so from a pretty shitty start I seem to have rescued something from the day.