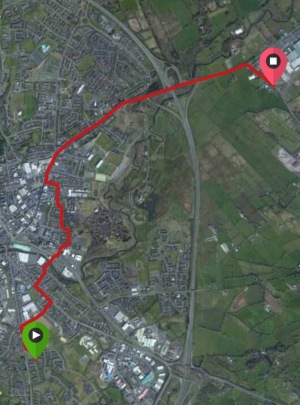 Tonight my local club ran a workshop designed for those looking to tackle a half or full marathon in 2017, and also for those who wanted to improve on their previous performances.

It was a hugely informative event. A lot I already knew, largely from making mistakes first time out, but there were also segments that were beneficial not to mention the ‘good practice’ reminders, of which I can never hear too much about.

It was also nice to impart a little advice and encouragement to some of the others who, while they might be better and faster runners than me, haven’t tackled endurance running before.

Anyway, earlier this afternoon, I put the door-to-door distance from my house to the venue into Google Maps just to see what it’d cost in a taxi to get there – it turns out to be 3.1 miles so there was only one thing for it …… run to it!

Hell, why not? I had a run scheduled today so it was a no-brainer really.

One thing did occur to me, I had to run through the town centre during the height of the Christmas shopping period so I had to alter my route slightly. The town centre is largely uphill from my house and whilst I tried to decide upon a route that was as flat as I could find it proved to be well nigh impossible.

There was also the psychological aspect to contend with. I usually run around my local area but, tonight, I had to run outside the town and almost to the next village. It’s not far – only a parkrun away after all – but it was a big mental hurdle.

I set off at quite a pace. I tried to ease off but it was difficult, although I knew the constant rise for about a mile would naturally slow me down – and it did – but not massively so.

The run was also constantly interrupted having to pause at the side of roads waiting to cross and so on. However, given those conditions, I was quite pleased with my time and, indeed, my final kilometre which was largely flat and straight was considerably faster than the one that immediately preceeded it.

I feel I’m starting to get my legs back after my week off which just goes to show that maybe having a break isn’t a thing to fear and that I won’t forget to run after all.