So that was parkrun #6 for me – and a slightly different one, too.

Due to the bitterly cold weather over the last few days it was touch and go whether or not it’d even be on but, following an 8am Facebook post, it was confirmed to be going ahead.

I had my doubts. It was so foggy outside, white underfoot and just generally a freezing morning …. but off I set.

To be fair, as I walked towards and through the town centre, it didn’t seem too bad. However, once I turned down Suffolk Street which takes me directly to the Ecos Centre, it got quite slippy. It was impossible to walk on the footpath so I took to the road and even then I had to be careful.

I didn’t see how this could go ahead and, if it did, I’d be liable to go over on my ankle or something.

Thankfully, the Run Director and his assistants were on the case. They had scouted the course and had decided to change the route so that we did two loops of the second part. 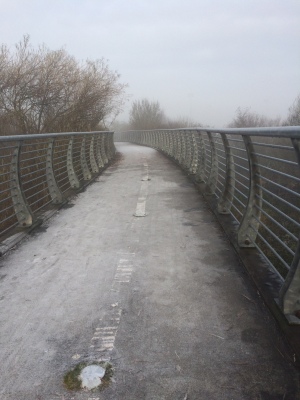 That meant bypassing the slippery parts that I had walked through which, as you can see, would have been quite treacherous to run on.

As it turned out, the amended course was perfectly fine. I quite enjoyed it, especially since it was so misty. The problem with that is that I couldn’t see who was ahead of me, or how close to the end I was. I didn’t see a tailrunner, though, so it’s all good!

Performance wise, I was reasonably happy with how I got on. My legs didn’t feel as bad as they did on Thursday, and that was after walking 40 minutes to get there!

I ran and chatted with a lady all the way round which was nice and helped pass the time. It’s always pleasant getting to know someone else, especially someone of a similar pace.

At the time of writing I’m not entirely sure of my time because the course was 5% shorter than usual due to the necessary changes but an adjusted time will be posted on the event site at some point.

However, based on my Garmin, it was my fastest pace for the past two weeks so I’ve got to be pleased with that.