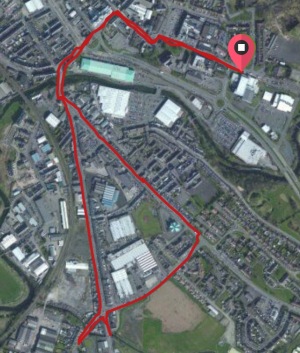 Tonight was my second run as an official, fully paid up member of Ballymena Runners.

After collecting my membership card and making arrangements to get myself a club running shirt I set off, as per last week, in the 30 minute group.

I was briefly tempted to try the 45 minute group but seeing as the step up week is on December 5th I decided to stay where I was for another wee while yet and then give it a go.

Given the freezing temperatures, it was a very enjoyable, relaxed run and even though we had to be mindful of the conditions underfoot – which necessitated tiptoeing around some ice patches – we covered the route at quite a reasonable pace.

I was amused that, after walking 20-minutes or so to the Leisure Centre to meet up with everyone, we started running straight back the same way and came within 50 yards of my front door! At least I was running on familiar footpaths so was able to concentrate more on my performance rather than keeping on eye on what I was running on.

And it was during this section around my house that I suddenly found myself changing my stride, completely by accident. Usually I take short steps but, for some reason, I started extending my legs, albeit without stretching them as far as to cause injury.

It instantly felt easier and more relaxed, any pain or tiredness in my legs lifted straightaway and whilst I felt I was going slower I actually started to close in on the people in front of me.

It was quite a revelation, to be honest, and although I kept slipping back into my normal stride everytime I made the effort to return to this new one I could detect a marked difference to my energy levels and performance.

It’s something I’ll have to try hard to develop because, if I can, it could prove to be a significant breakthrough. Watch this space!