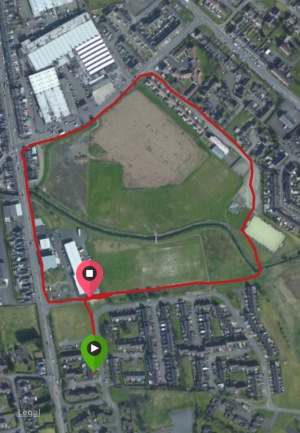 Wow! What a night! Tonight’s Ballymena Runners class went far better than I could ever have imagined it would.

Beforehand I felt physically sick at the idea of it. My legs felt really tired and heavy, I’d done about 12,000 steps already and went for a nap to see if it would refresh me a little. I woke up feeling awful and really considered not going out tonight.

But once I saw everyone gathering up I dragged myself out the door. The actual run was 3×3 minute sessions and I barely noticed them. Again, I led from the front, this time right from the start.

The club secretary, who was taking my group, came up alongside me to ask if I was who he thought I was …. which I was. Obviously. I am who I am! The one and only!

So after chatting to me as we ran for a while he let me go on ahead and dropped back to chat to the others, shouting forward when he wanted me to change direction.

I was going really, really slowly when all I wanted was to let loose and go quicker – but that would have split the group and wouldn’t have been fair on everyone else.

Then, at the end of the second session, the club secretary joined me at the front again and with him came another ‘proper’ club member who helps out at these classes, a woman whom I recognised from just around the estate but I didn’t know, I only found out her name tonight.

She clearly knew who I was because she started chatting straightaway, mentioned she had seen me out running at the weekend, asked about the marathon, whether I was doing it next year and so on ……. I told her I’m doing it again, so is she it seems – a potential training partner?

We ran the last three minutes together but, as I said earlier, I barely noticed we were running. It was great to be able to hold a conversation whilst running at the head of the group.

After the cool down we then walked back home and stood outside my house for what seemed like ages just chatting about running.

I shared my worries and insecurities with her and she went to great lengths to put me at ease, telling me about all the different events and training sessions the club organises and assuring me there’s no way I’d be out of place.

I mentioned about not entering a race in Broughshane at the start of August because I was scared of coming last – it turns out it was actually her who came last!

She marshalled at the Fairhill 5-Mile Road Race in June and recalls urging me around the course because she spotted me struggling.

I explained that I felt really out of my depth that night because I was running marathon pace and everyone else was sprinting. She had done the Belfast Marathon a month earlier and didn’t feel ready to tackle the 5-Mile Race so she said she really admired me for giving it a go after having done London, which was only a week before Belfast.

As we chatted, talk came round about parkrun, she often goes to help out but doesn’t run because she’s not keen on the course, but this week she has offered to help pace me round, I might just take her up on that.

She also urged me to come along to the Wednesday night interval sessions at ecos, that’ll really help me apparently. She explained that no-one ever knows who is last or slowest at that because of how they do it, seemingly everyone finishes at the same time. I don’t quite understand but I suppose I will once I go.

All in all, a hugely successful night. From the group leader recognising me and what I’ve done to Allison being really supportive and encouraging. I suppose that’s exactly what I hoped to get from these classes, it’s just up to me now to make the most of it.