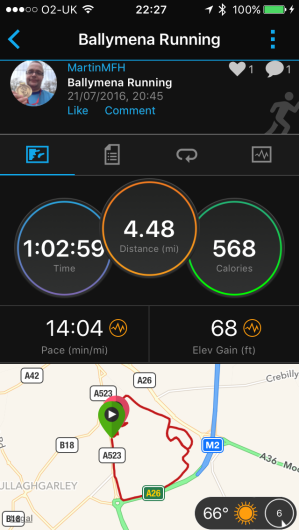 … or something like that. At least that’s how the last .2 km of tonight’s run felt.

The plan called for 4.5 miles, a distance I’ve only gone over once since the marathon, so it was a little bit daunting setting off.

I decided to return to my old pre-marathon training route of running along the dual carriageway and then industrial estate, as much for a bit of nostalgia as a change of scenery, I hadn’t been up round that way for probably a couple of months.

As before I stuck to the C25K intervals plan which was a little frustrating when I wanted to run for longer but it was following this routine that got me up to where I was before Christmas so I’m going to try to adhere to it.

The run itself was ok. As usual my legs burned up during the early minutes then my ankles hurt but that all settled after half-an-hour or so and I settled into it.

Except for the last bit. Four-and-a-half miles equated to 7.2km and because I prefer kilometres I measured my run that way.

The first seven were grand, the last .2 was hellish, mainly because I was resigned to running up and down the street just to get that last bit of the distance in and, psychologically, my legs felt like they had breeze blocks tied to them! Oh, and the neighbours were out watching me. Lovely!