When I was planning my holiday to New York I thought it’d be fun to see if there were any races being held whilst I was there.

I was initially frustrated because whilst I did discover races being held either side of the week I was due to be in Manhattan I couldn’t find one for the actual time I was there.

Until I happened upon the New York Harbor Oyster Classic (NYHOC) 5k on Governors Island.

First of all, where was Governors Island? I’d heard of Liberty Island, Ellis Island and Staten Island etc. but this was a new one on me. A few minutes research led me to discover that it was only half-a-mile off the coast of the southern tip of Manhattan and about half that distance away from Brooklyn on the other side.

That meant it necessitated having to get a ferry across Buttermilk Channel to actually make the race itself, an added bonus in my book!

A bit of investigation into the race itself threw up that it was a small event organised by, and as a fundraiser for, the Urban Assembly New York Harbor School. This would only be the third edition of the race, ironically the inaugural event in 2017 was held on my birthday! Little things like that tickle me.

And with views of the famous Manhattan skyline and the Statue of Liberty on offer it just kept sounding better and better. Then, after emailing the organisers, I discovered I would be the first ever Irish person to take part it suddenly became one of the absolute must do’s of the entire holiday. Sign me up, take my money!!!

Such was my eagerness I think I made it to the designated packet pick-up point on the Thursday about 20 minutes after it opened!

The race itself was on Sunday morning, the last full day of the holiday. We had to be at the ferry point by 8am to get the boat across to the island. I got there about 7:30am and already there were quite a gathering waiting outside the Battery Maritime Building for boarding.

To my horror I noticed one guy milling around wearing a Republic of Ireland football shirt. Noooooo, I thought, this wasn’t in my plan. I was supposed to be only person from Ireland here (North or South). I wanted to set the Irish record, no matter how slow! Happily, I was close enough to hear him speak and, to my relief, he had an American accent. Phew!

The ferry ride itself was only a few minutes long but I managed to get myself into a prime position for an unobstructed view of the journey across, leaving at the same time as the Staten Island ferry from the terminal building next door.

Arriving on the island without a clue whereabouts to go I just followed everyone else to what appeared to be a school building. I milled around there for a while, standing out like a sore thumb in my Ballymena Runners shirt whilst everyone else either wore the official race t-shirt or some branded running gear!

As with the weather for the entire week it was already quite warm this early in the morning so I decided to take it easy. I very likely will never be here again so I was determined to soak it all up and just enjoy myself.

Hence, once the race started, my pace was quite pedestrian. Initially there was no view, just running between buildings but then we turned a corner and … oh my gosh! … there was the Statue of Liberty in full view. Wow! Just wow!

I know I’d been on Liberty Island a few days earlier and got up close, but this was something else. I was racing in New York and there was the Statue of Liberty in full view! It stopped me in my tracks. Stuff my pace, I needed a picture of this. So I took one – or several dozen! I ran on, but at a VERY leisurely pace. I wanted to enjoy this.

Eventually the course took us away from the SoL before turning a corner and there was the Manhattan skyline! Another wow moment! Again, I’d been looking at it all week but this was another fantastic experience, another different perspective … and more pictures, lots of them.

By this stage I was blown away by the occasion. I know it was only a small race, but for me it was an amazing thing to be part of. Goodness knows how I’ll feel if I ever get a place in the New York Marathon!!!

It was by no means my fastest 5k, but that didn’t matter. It was a thrill just to be there. Even the medal was different, an actual hand painted oyster shell. Definitely something unique amongst my collection from an unique all round experience.

If I’m ever back in New York – and I intend to at some point – I would love to explore Governors Island a bit more. The race went through some lovely landscaped grounds but I didn’t really get the chance to look too closely. It seems like an oasis of peace and quiet away from the hustle and bustle of Manhattan, but with amazing views. If you ever get the chance to visit, then please do so. The ferry across runs very regularly, is easy to find (walk to the left past the big Staten Island ferry terminal building) and, from what I gather, there is a regular programme of events and activities to visit and attend. 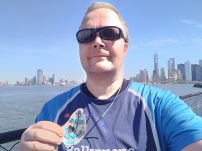