Another day, another run. My training plan had it down as ‘easy’ but perhaps gentle might be a more apt description.

I met up with the usual suspects, namely Iverene and Bronagh. They were out on a much longer run (double figures), so I had arranged to join them for the last few miles when their route brought them near me. My plan had four miles for today so we tried to time it so that’d be the case.

It was another hot morning, and my left knee was perhaps feeling it a bit after my intervals session last night, so I wasn’t entirely sure I’d even be able to run much with them anyway.

After they took a water stop we set off … and almost immediately climbed the Toome Road! It’s not a massive incline but it’s long and steady, and a challenge whether on fresh legs or, like Iv and Bronagh, with miles already in them! The heat didn’t help either but we got over it and then proceeded to head out towards Tullygarley and onto the Dans Road before turning left to go into the village of Galgorm and a short run along the river to finish.

As I said, this was a gentle run. I wasn’t worried about pace. For me it was a case of testing my knee and to just keep ticking over generally. But it turned out the pace wasn’t too bad anyway, more or less on marathon pace and it’s always good to practice that.

An enjoyable outing, and I came through unscathed.

That’s me now until my next half – number nine for the year – in Bath on Sunday. I might do Chippenham parkrun but that’ll depend on how my knee feels after two days rest. It’s seems ok as I write this, but maybe rest might be better than chucking in an extra race before a half marathon. Time will tell. 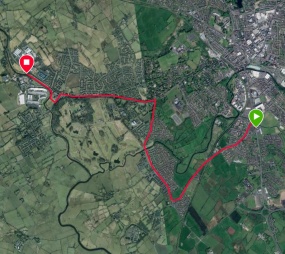