The sensible thing when deciding when to do a speed session would be to time it so that you’d avoid the worst of the sun.

As I said, that’d be the sensible thing. I don’t do sensible.

No, I thought it’d be a jolly spiffing idea to venture out mid-afternoon just when temperatures were at their highest, and the sun was at it’s brightest.

However, in my defence, there was logic to my madness. Y’see, I’m racing tomorrow night when the temperatures are forecast to hit 20° and then again on Sunday when they’re expected to tip 22°.

So, I reckoned, a wee bit of heat training wouldn’t do a chap any harm.

As I said, today was my weekly speed session. I was tasked to run 6 x 0.5mile at my target 10k pace (10:20 per mile), with two minutes recovery between each split.

I went into this thinking that it wouldn’t be as tough as last week’s session (4x5mins @ 5k pace with 1 min recovery). I mean, I didn’t have to go quite as fast and I had more recovery time.

And initially that proved to be the case. The first couple of splits were ok, and I actually came in ahead of target at 9:57 (min/mile) and 9:50 respectively.

But then I started to tire. Perhaps it was the heat starting to sap my energy, but the third split was a bit of a struggle (9:57) and whilst I was slightly quicker the fourth time around (9:48) by now it was a real battle, both physically and mentally.

I was getting tired, the sweat was lashing off me and I was looking at my watch with dread as each two minutes recovery counted down towards zero with alarming velocity.

I couldn’t really tell at the time what my pace was, but I knew I was still completing each half-a-mile segment in around five minutes and I knew that was a wee bit too fast.

Don’t get me wrong, going a bit faster was ok, I wasn’t complaining but I also knew I could afford to ease off a little bit for the final two runs. These clocked in at 10:03 and 10:05 respectively, so still within target which was good.

I haven’t yet mastered the art of pacing myself properly during these sessions, but this felt better than my previous attempts.

It was a bit of mental slog pushing myself through at the end, but I tried to focus on the greater good.

This WILL benefit my running, I told myself, and even though I’m only into the third week of my structured training plan I’m starting to notice an improvement already.

I’ll keep going and I’ll stick with it. I owe myself that much. 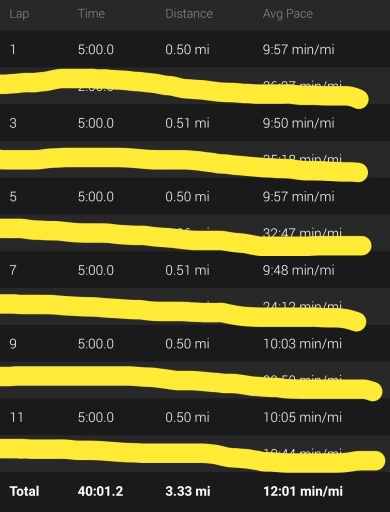 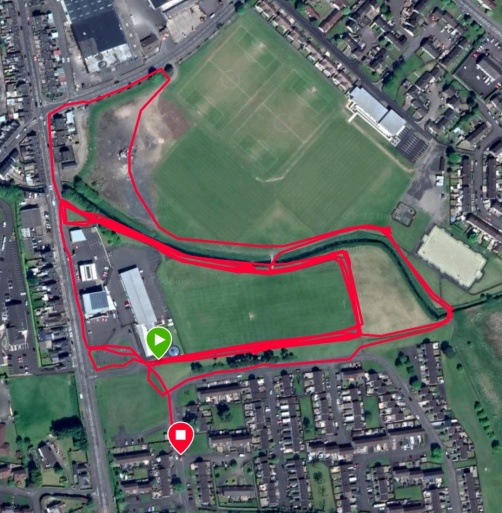