Around this week every year I do my annual ‘state of the nation’ report, with two back-to-back races which I use to gauge my progress as a runner.

I use this week because it coincides with the anniversary of my first ever run out on the road (prior to that I had only ever gone on a treadmill).

The two races in question are my local parkrun followed by my annual club 5-miler on the Wednesday evening either before or after.

First up, with it being a Saturday, was parkrun.

I’ve said many times I love the concept, and I love being a tourist when the opportunity presents itself … I’m just not a fan of my local event. That has nothing to do with the people or the route, it just comes from the totally unnecessary pressure I put on myself. I’m quite relaxed running elsewhere, just not at home.

Because I’ve been running well lately I had dared hope for a decent time today. I’ve beaten my parkrun pb during the first 5k of my recent races so the theory was that I should be able to do it in a standalone event without holding back because of having one eye on the entire distance.

As I said, that was the theory.

On Thursday and Friday, my two rest days, I was convinced I could do it but upon waking up on Saturday morning my confidence evaporated. I suddenly couldn’t believe I could even improve on last year’s time (35:13), never mind clock a pb.

Normally I would have been happy enough with that time but this was different, this was my progress report and surely a slower time would have signified a step back.

I know that sounds ridiculous. I’m a year older, getting dangerously close to 50, so there’d be no shame if I started getting slower, and obviously it will happen sometime.

But, today, I had myself worked up that a slower time would represent a failure.

With all those thoughts going through my mind I was even more withdrawn than usual this morning immediately before the start. Apologies to those who saw me, or spoke to me, if I seemed to be ‘off’ but a lot of my old pre-run nerves had returned with a vengeance.

I hadn’t run with music for quite a while. Today that changed, in went the earphones and on went Rammstein to blast the doubts and distractions out of me!

My tactics were to run quickly for the first mile, but without tiring myself out, to see what time I had left to at least beat last year – and then divide that in two to give me a target pace for the remaining couple of miles.

Starting off, I surprisingly settled into the run very quickly and, in fact, found myself holding back over the first mile. I felt like going faster but erred on the side of caution, not passing people when I knew I could.

I was therefore quite pleased when the first mile came in at 10:21, that allowed me over 12 minutes per mile for the next two to dip inside my parkrun pb (34:35). Surely I could manage that.

I’ll admit to actually easing off a bit after that. I could have pushed on, but I knew I had the race on Wednesday night still to come as well, and with a pb within my grasp now there was no point in wasting all my energy.

Mile two came in at 11:10, 50 seconds slower but that was perfectly ok in my book. It was a conscious effort on my part to reduce my speed, and that still gave me oodles of time for that last mile and a bit. I had this. I knew, barring a disaster, I was going to smash it.

In the end, I shaved 43 seconds off my parkrun personal best and 1:21 off my time from this week last year. I have to be delighted with that.

And so now onto Wednesday night … let’s see what that brings! 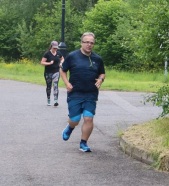