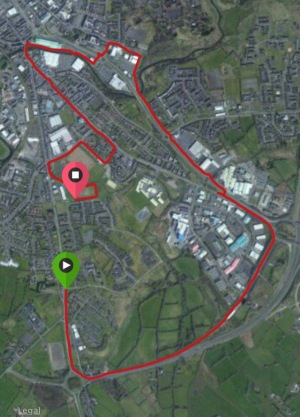 Today was my first Sunday run since London, and I had tentatively planned to do 10k in order to prepare for my next few races. That wouldn’t have been a problem had I gone out in the morning, or in the evening.

But, oh no, I couldn’t do anything sensible like that, could I? No, this plonker here opted to go out at lunchtime, at the hottest part of the day.

And, not only that, I decide to push myself instead of respecting the conditions and taking it easy. Oh, and I didn’t take any water with me either. You’d almost think I’d never run before.

Hold on until I beat myself with a big stick 🙂

Anyway, as I said, I don’t cope well with running in the heat. Don’t get me wrong, it’s nice to feel the sun on your back and it’s pleasant being out and about on a day like this. I just find it difficult maintaining a decent pace in it after a while.

In the end, my run was 4.3 miles – so short of what I’d hoped for – but I’m not terribly disappointed with it.

From the point of view of practising running in the heat it was a very valuable and worthwhile exercise. The first three miles were decent enough. In fact, mile 3 was quicker than the one that preceeded it, whilst the opening mile was very good for me.

It was only after passing the 5k mark that I struggled which, I suppose, tells me something about preparing for runs in those sort of temperatures. It was 18º – compared to the 11º at the marathon – so considerably warmer, and it’ll only rise as we go through spring into the summer months so it’s something I need to get used to, and I know I will.

When I say ‘struggle’ I mean my body in general, not my legs. They feel fine, had a lot more left in them and, on another day, I could comfortably have carried on. In fact, they’ve been feeling strong since the marathon, something that both pleases and surprises me.

I just wasn’t fuelled or hydrated properly today. I simply underestimated the combination of distance and weather, I basically overheated and there was no point punishing myself by carrying on. Was I cocky, thinking I was only going out for six miles so wouldn’t need to prepare as much? Perhaps.

I haven’t really too much experience running in the summer. Looking at my historical stats, I ran more in February or March this year than I did from May-August combined last summer, only going as far as five miles on one occasion, so this is basically uncharted territory for me.

Lesson learnt, but it’s all good.

On another note, I’m really looking forward to returning to the club tomorrow night. I haven’t been for three weeks because it either wasn’t on, or I was out of the country (ok, England!) but I’ve missed it and I always find it sets me up for the week.